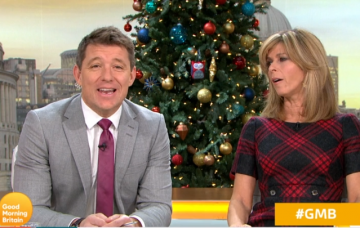 GMB viewers in hysterics at show’s ‘rude’ blunder towards guest

Good Morning Britain viewers were left amused as they spotted a hilarious captioning gaffe with a police officer’s job title.

On Friday’s show, hosts Ben Shephard and Kate Garraway went live to Gatwick Airport to get the latest on the drone chaos that’s been making headlines this week.

Steve told viewers: “We’re in a much more positive place today. The runway is open, we’ve been working really hard with our partners and the airport authority to achieve that.”

But viewers watching from home were more focused on the shortened job title the show had given Steve – “Ass Chief Constantable”.

Earlier in the show, viewers were left baffled when Joe Swash mispronounced the Prince of Wales’ name, calling him “Prince Chiles”.

The I’m A Celebrity: Extra Camp host presented a segment from Dumfries House in Ayrshire, Scotland, on Friday morning as part of the “1 Million Minutes” campaign – which helps lonely people the UK.

Joe, 36, was showing off a special event by Dumfries House to celebrate and help the elderly or those alone at Christmas.

“It’s an amazing, amazing place. I’ll give you some history first. It was built in the 1700s and ten years ago it got itself a brand new owner… the Royal Heiness Prince William, oh yes.

Although Joe didn’t notice his on-air blunder, viewers watching from home certainly did and shared their thoughts on Twitter.

Read more: Fans beg Joe Swash to propose to Stacey Solomon as they reunite after I’m A Celeb

One person said: “Oi Joe… Who the hell is Prince Chiles??? All those talented tv presenters out there & they choose this horror show. #GMB it’s embarrassing.”

Another wrote: “#gmb Joe swash pronouncing our future king as chiles? After getting wrong name? Give me strength.”

What did you think of GMB today? Leave us a comment on our Facebook page @EntertainmentDailyFix and let us know what you think!