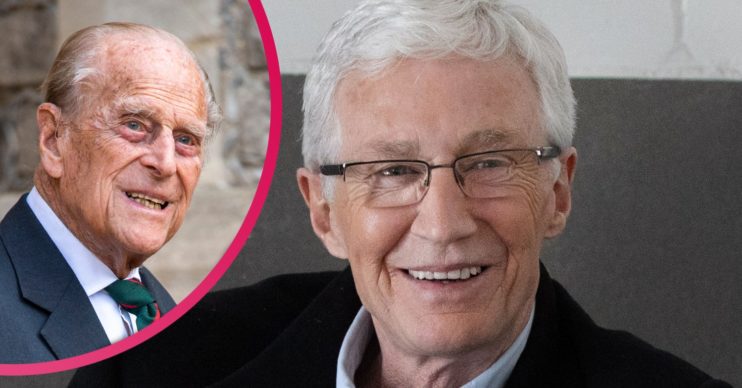 The duke showed his cheeky side when he met Lily Savage

For the Love of Dogs star Paul O’Grady has divulged a cheeky encounter between himself and the late Prince Philip.

The pair would no doubt have met several times during the course of Paul’s career, but Paul has recalled a particular occasion when he was dressed in drag.

Of course, fans of the veteran TV personality will know that Paul came to fame as the drag artist Lily Savage.

What did For the Love of Dogs star Paul O’Grady say about Prince Philip?

Recalling their meeting on Instagram, Paul shared: “I was asked or rather Lily Savage was asked to present the Duke of Edinburgh Awards at St James’ Palace some years back.

“When I was introduced to Prince Philip, he took one look at Lil and said: ‘The last time we had someone like you in the palace her name was Nell Gywn.'”

As well as being a notorious celebrity of the Restoration period, Eleanor Gwyn was best known as a mistress of King Charles II.

Fans were quick to comment on Paul’s story, with one replying: “Perfect humour for a lovely gent… RIP Prince Philip. Thanks for the memory Paul O’Grady aka Lily Savage.”

Another added: “What a lovely memory.”

A third thought it was hilarious and called the quip “priceless”.

Earlier this month, Paul was forced to deny claims that he warned Meghan Markle against “really riling” the Queen.

The animal lover fired back at the reports using his Instagram profile.

The original story suggested Paul, 65, previously offered advice to the Duchess of Sussex, 38, during an interview in 2018.

However, Paul has since insisted that isn’t the case.

Sharing a screenshot of the story, the presenter said: “My Ma used to say that the only thing you can believe in a newspaper is the date and here’s a classic example.”

He said: “I’ve never met the woman, let alone given her advice.

“I suppose they’ll have me telling the Queen her nets need dipping in a dolly blue bag next. #MeghanMarkle.”

Fans praised Paul for speaking out and setting the record straight.

Paul O’Grady: For the Love of Dogs on ITV

In episode three of series nine tonight (April 21), the comedian continues to follow the work of Battersea Dogs & Cats Home in London.

He meets staff involved in treating, training and rehoming animals.

This time, Paul helps staff train a lively Beagle cross puppy, before spending the day keeping a Bichon company that is used to living in a busy home.

Later, he helps a shell-shocked elderly Staffy who was left tied to the gates, and subsequently gets caught up in an outbreak of parvo virus which all the Battersea staff battle to contain.