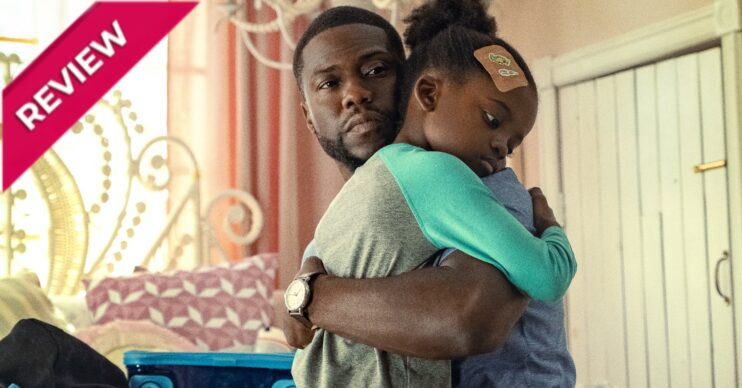 Is the Netflix film worth the watch?

Based on the book Two Kisses for Maddy by Matt Logelin, Hart stars as a new dad tragically widowed hours after his daughter’s birth.

Struggling to figure out how to be a father to Maddy without wife Liz around, Matt is soon on a crash course in everything to do with his little girl.

With the help of his in-laws and best friends, he makes it work for as long as possible, keeping Liz’s memory alive as best he can.

However, as Maddy (Melody Hurd) starts getting older, she needs more female influence in her life.

Meanwhile, Matt has to figure out this new phase of having a daughter and how to be happy himself.

As much as this is Hart’s show, the story hinges on character Maddy – and thankfully the bond the two actors clearly share really sells the story.

The stunning cast really nailed the dynamics of a real family, including the grief each suffers as one is lost.

While Matt has Maddy, his mother-in-law is dealing with losing her daughter, and tries to pour that into her granddaughter as often as she can.

Matt’s mother is just as worried, and wants him to return to his native Minnesota.

It’s a real heartbreaker at times, so bring some tissues.

As well as this, the film doesn’t shy away from some of the tougher moments of being a single dad.

In one montage, Matt is seen repeatedly being asked “Where’s her Mommy?”, coming up with a string of just as obscene reasons in return.

During another, he’s turned away from parenting class overrun by mothers assuming it’s just for them.

But the biggest challenge comes when Matt starts falling for someone else.

After so many years of being alone, he needs to grapple with balancing family and love – and Maddy’s reaction to a new woman around.

The film is perceptive but keeps moving, though it could have done with being a bit shorter than the final 1hr 50min runtime.

It’s also hard to ignore how the film seems to serve Hart. After coming under fire for homophobic comments in his stand-up specials, he needed some good PR.

Fatherhood is definitely a way to show him in more open and loving lights. But a reimagining of a story doesn’t exactly walk the walk of actual real-life.

But if you ignore the character rebuilding implications, Hart does a solid job and it would be remiss to sweep that under the rug.

Is Fatherhood worth the watch?

Fatherhood is a surprisingly sweet and tender tale of life when it comes at you too fast.

Kevin Hart does a great job as a leading man, with a tremendous supporting cast around him.

However, the young Melody Hurd is the real star of the show.

It’s easy to play a brat, or the butter-wouldn’t-melt kid, but she manages to juggle being both and be endearing.

It may run about 20 minutes too long, but it’s nonetheless a good little tearjerker for an evening in with some ice cream.