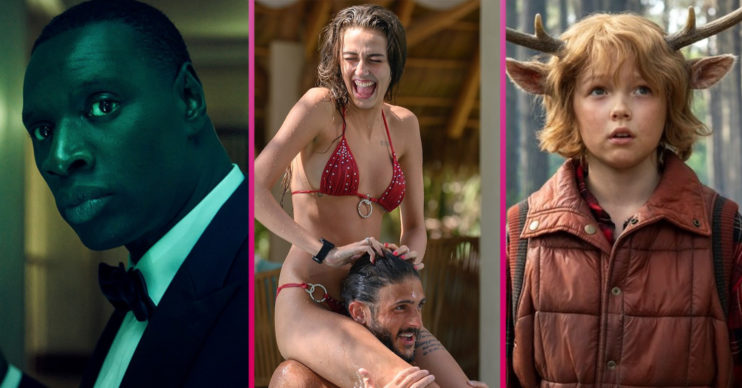 Netflix in June 2021: Everything arriving from Sweet Tooth to Too Hot To Handle

This juggernaut streaming service has everything this month.

Netflix in June 2021 is chock full of everything – from magical fantasy series to raunchy reality shows sure to get you hooked.

Need a zombie apocalypse horror to reel you in? Or how about an LGBT comedy?

Maybe a spy thriller is more your style? Trust us, Netflix has got you.

Here’s everything you need to tune into this month…

What TV series are coming to Netflix in June 2021?

The Channel 4/Netflix comedy is wrapping up with its second season, and it will be sad to see it go.

Following the complicated love story of former addict Mae and her relationship with George, the pair have to figure themselves out in these final instalments.

While Mae confronts her past, George is on a mission to reinvent her present.

Will they be able to stand the test of time?

This new fantasy series will whisk you away and melt your heart.

Sweet Tooth follows the story of Gus, a ten-year-old living in the forest after a mysterious illness swept the world, creating hybrids of humans and animals.

Born with antlers, he sets off on a mission to find a new sanctuary for him, and unexpectedly befriends a wandering loner named Jepperd (Nonso Anozie).

However, Gus needs to learn fast that not everyone is a friend, and enemies hide in strange places.

Produced by Robert Downey Jr and his wife, this may be the must watch show on Netflix in June.

Assane (Omar Sy) is on a mission against the criminal underworld, being framed for a crime he didn’t commit.

At the end of part one, things took a turn when Raoul, his son, was kidnapped on a family trip.

How he’s got to think fast or face deadly consequences.

The second season of the drama will continue the scavengers fight to survive.

However, last season ended things on a sombre note as it looked like they were about to be overrun by a horde of undead at a football stadium.

How will they manage to survive?

The one rule? No sexual contact of any kind, or lose money from the ultimate prize fund.

Will they be able to keep their hands to themselves?

Whether it’s extra crispy pork chops in Birmingham, deep fried Oreos in San Diego, or jumbo lump crab cakes in Baltimore, this show is finding it.

Daym Drops, YouTube’s “Grandfather of Food Reviews” travels all around the country to find the best unknown fried dishes.

Whether it’s street food, fancy restaurants, or home kitchens, he’ll try it all.

We dare you not to have your heart melted by this.

In Simon’s Town, south Cape Town in South Africa, a rowdy colony of South African penguins are famous for hitting the sun-drenched beaches.

Penguins may be native to the cold, but these guys have adapted to heat and can travel long distances.

As a result, they cause traffic jams and mayhem to this tropical paradise.

But they’re on a mission: find a mate, make babies and not go extinct!

What films are arriving on Netflix in June?

The digital influencer Nina discovers a video of her boyfriend’s betrayal going viral.

But the best way to solve a heartache? Girls’ trip.

As a result, she uses her contacts to travel to Salvador during Carnival, all -inclusive, together with her three best friends.

After a sudden global event wipes out all electronics and takes away humankind’s ability to sleep, chaos quickly begins to consume the world.

Only Jill (Gina Rodriquguez), an ex-soldier with a troubled past, may hold the key to a cure in the form of her own daughter.

However, can Jill safely deliver her daughter and save the world before she herself loses her mind?

In this heartwarming, funny and emotional true story, Kevin Hart stars as a widower taking on one of the toughest jobs in the world: fatherhood.

Keep a box of tissues on side for this one.

After years of putting her career ahead of love, stand-up comic Andrea Singer has stumbled upon the perfect guy.

On paper, he checks all the boxes… however is he everything he appears to be?