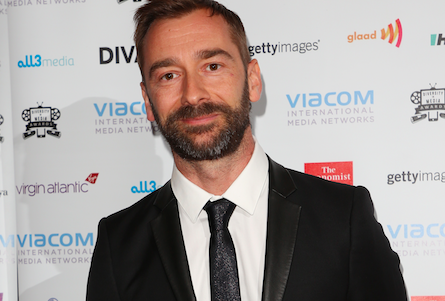 He played Marcus Dent in the ITV soap

Charlie Condou has filmed his first scenes on Holby City, and couldn’t resist giving his fans a sneak preview of his new role.

The former Coronation Street actor, 46, will be on screen in the winter playing new locum surgeon Ben.

The BBC have described Ben, who’ll work on Keller ward, as a charming, alpha consultant who will be stirring up the dynamics in the hospital.

Ahead of his on-screen debut, Charlie gave fans a first glimpse of his character.

Sharing with his Twitter and Instagram followers, Charlie posted a photo of himself in maroon hospital scrubs.

Alongside the snap, he simply wrote: “First day in scrubs at Holby City.”

Of course many fans rushed to congratulate him, with one saying: “Looking good bro. Have a fantastic time on this new chapter!”

Speaking about joining the medical drama, Charlie said in an official statement: “I’m over the moon to be joining Holby City as suave new Doctor Ben Sherwood.

“He’s a good guy, but will definitely be ruffling a few feathers over the coming months. I can’t wait to get started!”

Executive Producer of Holby City and Casualty, Simon Harper, said: “Charlie’s a very fine actor and well known popular TV face – we are lucky to have tempted him to Holby.

“I can’t wait to see him as Ben, both causing a stir and getting under the skin of his colleagues on Keller!”

Charlie appeared on ITV soap Coronation Street from 2007 until 2014 as midwife Marcus Dent.

Since his time on Corrie, Charlie has appeared in You, Me and The Apocalypse and ITV’s Unforgotten.

Holby City airs on Tuesdays at 8pm on BBC One.

Are you looking forward to seeing Charlie Condou in Holby? Leave us a comment on our Facebook page @EntertainmentDailyFix and let us know what you think of this story.