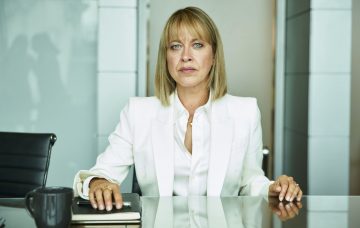 All about BBC divorce drama The Split with Nicola Walker

New BBC One drama will explore modern marriage and divorce

London’s reputation as the divorce capital of the world is the inspiration behind The Split, BAFTA and Emmy award winner Abi Morgan’s new six-part drama for BBC One.

The series, which starts tonight on BBC One at 9pm, follows the Defoes – a high-flying family of divorce lawyers whose business thrives as relationships flounder.

There’s a split within the family firm as eldest sibling Hannah (played by Nicola Walker) quits and moves to a rival law practice after being passed over for promotion by her mum Ruth.

Joining a new firm means reuniting with charming old flame Christie. But it also sets Hannah – a well-meaning solicitor in a cutthroat, money-obsessed profession – on a collision course with Ruth and sister Nina.

Read more: Missing Call The Midwife? These upcoming dramas will fill that hole

And as she battles to secure big payouts and wrangle out custody deals following scandalous affairs for her wealthy clients, the emotional brunt of divorce in her own life also hits home as her father returns to the scene after abandoning his wife and daughters 30 years previously.

There are also underlying issues within Hannah’s own marriage to Nathan to negotiate – will her professional life clash again with her personal life?

“I’m delighted to be joining the Defoe family and walking in Hannah’s shoes as she picks her way through other people’s marriages and relationships, all the while questioning her own,” Nicola said as her role in the drama was announced.

Writer Abi – who also penned The Hour (starring Ben Whishaw, Dominic West and Romola Garai) and Margaret Thatcher biopic The Iron Lady (with Meryl Streep in the lead role) – has noted she became interested in creating a family story set in legal circles after finding out divorce law is not dominated by men.

“Divorce law is primarily seen as the unsexy end of law, so it was traditionally women were drawn to it,” she told Harper’s Bazaar.

“This was a way to comfortably put an ensemble cast of women together that would be plausible, authentic and representational.”

The Split is female-led behind the scenes, too: produced and directed by Jane Featherstone and Jessica Hobbs, the BAFTA-winning team behind hit ITV murder mystery Broadchurch.

Who’s in The Split?

Unforgotten and Last Tango in Halifax star Nicola Walker plays the formidable Hannah, a respected and successful lawyer known for bringing in big figure settlements for her clients.

Born into a family of divorce lawyers, she is the dependable ‘fixer’ to her sisters and mother away from work.

But that reliability seems to be shattered as she walks away from the family firm and her absent dad shows up unexpectedly.

Nicola described her character’s reactions to her dad’s return as “like a grenade being very gently dropped into her life.”

She told the BBC: “It forces her to re-evaluate everything about herself, everything that happened before this moment, how she moves forward. It brings the past back to haunt them. They’re all rocked by it.”

Anthony Head plays Oscar, Hannah’s wayward father, and Deborah Findley takes on the role of mother Ruth, the head of the family and the firm.

What is The Split about and what happens?

Writer Abi promises The Split will be “an authentic, multi-layered exploration of modern marriage and the legacy of divorce seen through the lens of the Defoes – a family of female lawyers at the heart of London’s emotionally-charged divorce circuit.”

Relationships between mothers, daughters and sisters, marriage and commitment all come under the dramatic microscope as Hannah’s good intentions are tested by her family and, in the first episode, clients which include a unpleasant millionaire who dumps his oblivious wife and an unfunny comedian who makes his ex the punchline of his jokes.

However, The Split is not a court procedural – a lot of the drama unfolds in solicitor’s offices. This means viewers won’t be blitzed by characters tearing into one another across a courtroom.

Abi highlighted this by saying she wants to address the stigma of divorce and remove the notion of how it must primarily indicate a marriage has failed.

“One of the most profound things a divorce lawyer I met said was ‘I don’t see divorce as failure, I see some marriages as finite’,” she said.

“That’s also at the heart of the series, that we put huge pressure on ourselves to have this happy ever after, and in a time where we live a lot longer and have so many more options and choices, and more opportunities for women to create their own wealth, it reconfigures what marriage is.”

A rare storyline treatment of a female midlife crisis also makes The Split stand out. Despite her success, Hannah’s faith in her own judgement crumbles as she wonders whether the big decisions she has made in her life were correct.

“I really enjoyed playing a woman whose story isn’t about how is she juggling family and work,” Nicola told The Guardian.

“Hannah’s problem isn’t the thing that we’re normally told as female viewers should be the problem.

“She’s got a brilliant job, she’s got a lovely husband, she’s got three kids – it should all feel great. And yet, as it goes on, it doesn’t.”

Even though The Split approaches storytelling from the perspective of its female characters, it does not neglect male characters – even if the men do play second fiddle to the show’s powerful women.

“I didn’t want to do what happens in male-centric dramas where the man would be in the background draped across a bed or chopping a carrot or looking busy in his study, and gets one line,” said Abi.

Show bosses Jane and Jessica Hobbs are confident The Split will have universal appeal for TV audiences.

“There will be something recognisable to everyone in this series, whether through the multi-generational Defoes, or the stories encountered in the cases week by week,” Jane told the BBC.

“This is a series for anyone who has fallen in love, fallen out of love, or is still trying to understand what love is all about.”

Where else have you seen the cast of The Split?

As well as memorable roles in Last Tango in Halifax and Unforgotten, Nicola is also recognisable from her TV appearances in Spooks, Luther, Scott & Bailey, River and Collateral. She has also acted in New Tricks, Dalziel and Pascoe and Jonathan Creek.

Stephen Mangan plays Hannah’s husband Nathan, also a lawyer, but slightly oilier. As well as lead roles in Epsiodes, Green Wing and as Adrian Mole, Stephen has also turned up in I’m Alan Partridge and Marple. He provided the voice of Postman Pat in the 2014 animated film about Greendale’s best known Royal Mail employee.

Olivier award winner Deborah Findlay is probably best known for her stage career but has also popped up in the likes of Silent Witness, Midsomer Murders, Cranford and Foyle’s War on TV.

Fiona Button plays the youngest of the three Defoe sisters – and the only one not to be involved in law. Fiona has previously appeared in Grantchester and comedy sketch show Cardinal Burns.

Anthony Head was known to viewers of Buffy the Vampire Slayer for playing Rupert Giles for 121 episodes. He has also appeared in Little Britain, Merlin, Monarch of the Glen, Boon, Bergerac and – of course – as the smoothy in the Gold Blend coffee ads in the late 1980s and early 1990s.

Meera Syal may be best remembered from her comedic roles in Goodness Gracious Me and The Kumars at No.42 but she has also appeared in the likes of Absolutely Fabulous, Broadchurch and Life Isn’t All Ha Ha Hee Hee, a BBC miniseries adapted from one of her novels.

The Split is on BBC One from Tuesday April 24 at 9pm.

Will you be watching The Split? Let us know what you think by leaving us a comment on our Facebook page @EntertainmentDailyFix!