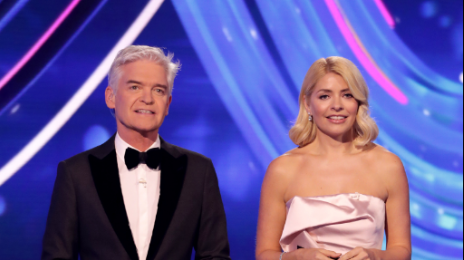 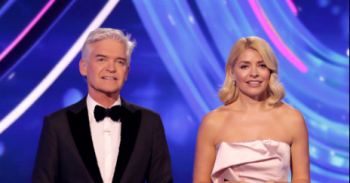 It's got everyone talking

Holly Willoughby’s dresses are always a big talking point of Dancing On Ice.

And, while her style might not please everyone every week, her outfits always make a statement.

This weekend is no exception, with Holly pulling out all the glamour stops for the final.

Her Peter Langner Couture evening gown, shoulderless and blush pink in colour, saw the presenter compared to an angel by some fans.

But many were baffled by one aspect of it… or should we say delighted to have something to take the mickey out of.

The 37-year-old’s dress features some black embellishment around the middle, down the right-hand side, which has put viewers in mind of one thing: duct tape!

Well it’s been 10 wonderful weeks… what a final this is going to be! Good luck to @saaraaalto @wes.nelson and @jamesjordan1978 … thank you to all our incredible celebrities who take part and make this show what it is… we are in awe! Tonight’s #hwstyle💁✨ on @dancingonice dress by @peterlangner jewellery by @boodlesjewellery 💕

Read more: James Jordan kicked in the crown jewels ahead of final!

Holly looks gorgeous as always but what’s with the gaffer tape stuck on her dress? 🤷🏻‍♀️😂 Did she have a wardrobe malfunction before the show? 🤣 #DancingOnIce #DancingOnIceFinal pic.twitter.com/RH5Acyx9Vq

Is there a reason why there’s gaffa tape over Holly’s dress?! #DancingOnIce

why does holly’s dress look like it’s ripped but they didn’t have time to fix it so they’ve just used duct tape on it?? #DancingOnIce

I’ve loved all of Holly’s dresses this series, but this dress genuinely looks like she ripped it at the last minute and they sewed some patches onto it… #DancingOnIce

Read more: Gemma Collins claims to have a virus on finale day

One thing’s for certain, the detailing ensured Holly’s look was the talk of the night again… it’s almost like her stylist contrives it…

What do you thing of the frock? Leave us a comment on our Facebook page @EntertainmentDailyFix and let us know.