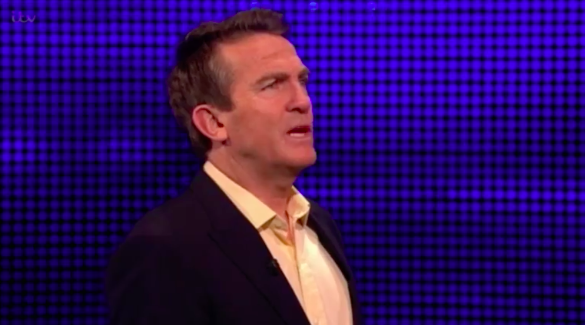 The Governess was put in her place!

It’s not often brainiac Anne Hegerty makes a mistake on The Chase… But, when she does, Bradley Walsh will soon pull her up on it.

And the host, 58, had the chance to do just that last night (June 4) and clearly relished the opportunity!

During Tuesday afternoon’s usual 5pm show, chaser Anne was pitched against a new team of contestants and was seen to struggle with one of the questions.

After being asked a question everyone assumed she’d know, Anne – aka The Governess – surprised everyone by getting it WRONG.

In fact, it transpires she had misunderstood the question entirely – and Bradders was only too happy to point out her mistake.

Or some might say rub her face in it!

Read more: The Chase contestant drives viewers up the wall with ‘annoying’ habit

Lyn was asked the question: “Which was the second city to hold the Summer Olympics twice?”

With the answer being either London, Paris or Los Angeles.

Contestant Lyn opted for London, but then quickly wondered if she’d chosen wrong.

She said: “I wish I had said Paris now, but I thought there were two in London – one in 1948 and one in the turn of the century.”

Bradley then had the rare opportunity to tell Lyn and the audience that Anne had got the question wrong!

He said: “A step closer to home. The chaser has put… Goes wrong with Paris.”

It soon became clear that Anne had misunderstood the question, as Bradley corrected her: “Yeah, but then London was the second city to hold the Summer Olympics twice.”

“Ohhhh,” realised Anne. “Okay. That’s me not reading the question.”

Anne soon redeemed herself, however, as she went on to wipe the floor with all four of the contestants!

Fans took to Twitter to marvel at Anne’s prowess as she “slaughtered the team” and “thrashed them”, leaving none standing for the Final Chase.

Do you enjoy watching The Chase? Leave us a comment on our Facebook page @EntertainmentDailyFix and let us know what you think!