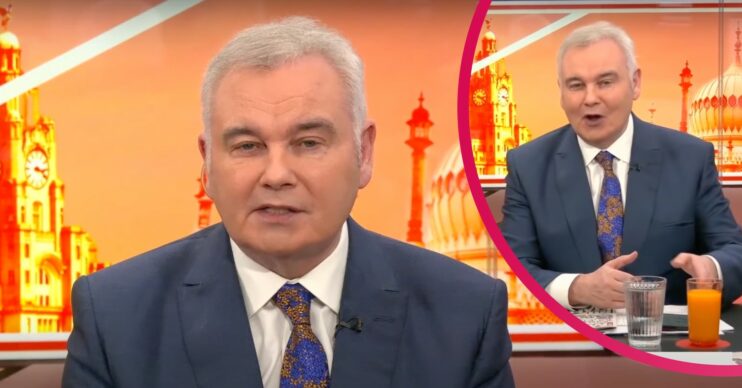 The presenter recently made the switch from ITV to GB News

The 62-year-old presenter made his debut on the channel this morning following his exit from This Morning after 15 years.

After 15 years on the This Morning sofa, Eamonn has had a change of environment.

The Irish presenter made his debut on GB News this morning in a new breakfast show – Breakfast With Eamonn and Isabel – alongside Isabel Webster.

Read more: Rochelle Humes ‘trying to find her feet’ as she grieves the loss of a loved one

“I’m having some lovely messages from people all around the country who are looking forward to whatever we’re going to do differently,” Eamonn said at the start of the show. “Hopefully we are going to do lots of things differently.”

Earlier this morning, Eamonn put out a tweet asking his one million followers asking for their opinions on the show.

“Well folks… What do you think of it so far?” he asked. It’s safe to say that most viewers were enjoying Eamonn’s new gig.

“Love it,” one viewer wrote. “You two are really great, you are a breath of fresh air in the mornings Eamonn. Well done!”

“Brilliant pairing and so professional. Knocks all others out of the water!” another said.

“Loving it! You’ve made my morning! I like the set too. So glad to have you back on breakfast television,” a third said.

However, some were not big fans at all.

“Absolutely awful, Eamonn. Unwatchable to be fair. It’s a real shame,” one said.

“Such a shame you’ve taken up with GB News. You’re better than that. Good luck but I won’t be watching,” another said.

In November 2021 it was announced that Eamonn would be leaving This Morning after 15 years on the show. He began presenting the hit ITV morning show way back in 2006.

He mainly hosted the show alongside his wife, Ruth Langsford.

In a statement released at the time his exit was announced, Eamonn explained to viewers why he was leaving.

“I’ve spent my career on broadcasting firsts and start-ups and GB News is one of the most exciting yet,” he said. “It’s just the kind of shake-up the industry needs.”

The presenter went on to say that he admired GB News for its “clever mix” of “punchy” debates that are delivered with a mixture of fun and warmth.

He added: “To me, the greatest honour in journalism is to give a voice and respect to the unheard, and that’s exactly what GB News is all about.”

Breakfast with Eamonn and Isabel airs weekdays at 6am on GB News.

What did you think of Eamonn Holmes’ GB News debut? Head to our Facebook page @EntertainmentDailyFix and let us know what you think of our story.