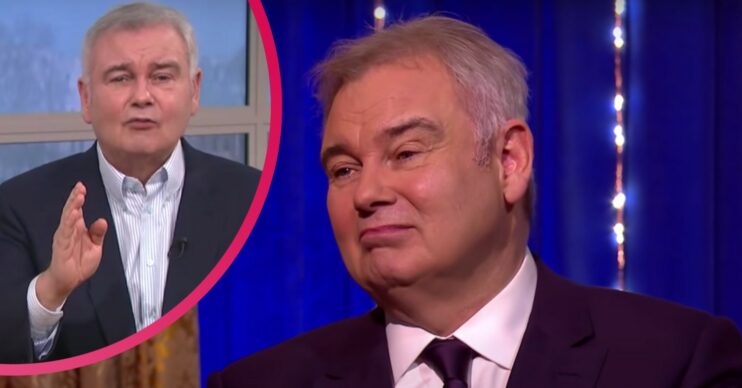 He made no mention of Phillip Schofield or Holly Willoughby

Eamonn Holmes avoided addressing anything to do with This Morning in a cryptic ‘snub’ to his former presenting gig.

But ahead of the announcement yesterday (Friday December 10), Eamonn refused to take questions about the ITV daytime show.

Furthermore, according to reports, Eamonn also ruled out speaking about hosts Phillip Schofield and Holly Willoughby.

Eamonn Holmes on This Morning

The Daily Star’s website reports Eamonn didn’t wish to speak about This Morning just hours before his new job was announced.

However, he did pay tribute to wife and co-host Ruth Langsford.

The duo shared the This Morning sofa with each other for 15 years from 2006.

Nonetheless, Eamonn reportedly ‘snubbed’ the opportunity to mention Holly or Phil during a chat with the tabloid.

Eamonn was apparently speaking to reports at the People’s Pet Awards on Thursday (December 9).

According to the Daily Star, Eamonn teased: “No questions on This Morning. You’ll see why…”

Later asked about his funniest moments with Holly and Phil on the show, Eamonn apparently refused to answer beyond a firm “no”.

No questions on This Morning.

He did however note how it has been a “privilege” to work with wife Ruth.

Eamonn added: “It’s always a privilege to work with someone who you have a telepathy with, a connection with and unlike a lot of partnerships this is real.

“It’s as real as it gets. Warts and all so it’s always a great privilege.”

When will Eamonn begin at GB News?

Eamonn – whose 40-year broadcasting career has included stints on GMTV and Sky News – will host a new GB News programme in early 2022.

Eamonn captioned the pic: “The band is back together! We did it before on Sky News, now we will become the new breakfast hosts on GB News from January. Happy New Year.”

Read more: Eamonn Holmes shares rare pic of son Jack and fans are shocked how like his dad he is

Meanwhile, This Morning recently confirmed that Ruth will remain on the show.

A spokeswoman for ITV said: “We would like to wish Eamonn all of the very best in his new role. As a duo, Eamonn and Ruth have been part of the This Morning presenting team for the last 15 years and we thank Eamonn for all of his hard work and contribution to the show.”