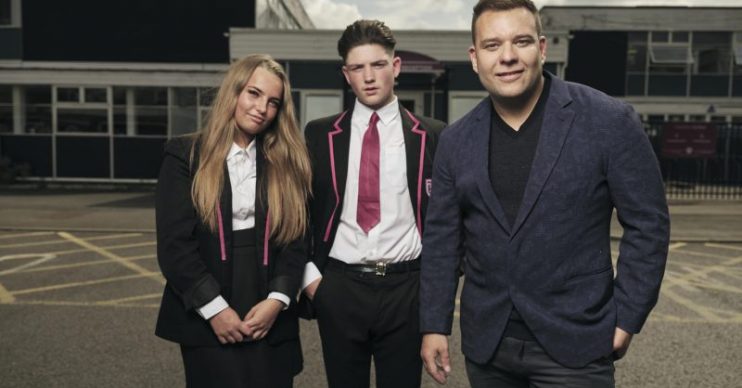 C4 doc Secret Teacher: 60 students crammed into a class with ONE teacher

Channel 4 viewers were stunned as a new documentary series exposed the “awful” conditions at a strained British school with packed-out classes and crumbling walls.

At one point in the programme, Paul sat in on a huge English class being taught in a Learning Resource Centre.

Sat next to one student, he whispered: “How come you’re in a big class like this today?”

The pupil replied: “Big class? Dunno. I think there’s, like, nearly 60 people in here. With one teacher. It’s a bit mad.”

The programme explained that, due to staff shortages, the school’s head of English was having to teach two classes at the same time.

After the scenes aired, viewers on Twitter were in shock that so many students had been crammed into one lesson.

One said: “[They] should not have 60 kids in one lesson, that’s awful, so awful for the teachers and the kids. So sad, really feel for this school. Also, it’s not just this school, there’s others. It is hard work and stressful but also the most rewarding job I’ve ever done in my life.”

Another tweeted: “60 students in a class?! And there was me struggling with my class of 35 in a 32-student room… #secretteacher.”

A third wrote: “It’s shocking to see a teacher trying to teach 60 year 11 children in such small space because they cannot afford another teacher. #secretteacher #funding.” Someone else put: “What a lovely programme @Channel4 #secretteacher. 60 pupils in a class though, that’s madness! Great to see someone like @EBPaulRowlett helping out.”

A fifth commented: “#secretteacher sure was an eye opener. Classes of 60 pupils can never be acceptable if we want kids to learn and succeed.”

“Most shocking part of this programme was one teacher having to teach a class of 60,” said a sixth, adding: “How much would you actually learn with all that disruption?!”

Speaking to The Sun about his experience on the show, Paul said he saw “plenty of things” that “saddened” him.

He told the paper: “Probably the most shocking was when I encountered an English class of 60 children and one teacher. The school had lost a teacher right at the beginning of term, and it was the only solution for the time being.

“The building itself is crumbling, some of it should probably be condemned. It was built in the 1970s and all the windows have metal frames. It means that when it’s hot outside, it’s boiling inside, and when it’s cold outside, it’s freezing inside.

“Those are not good working conditions for anyone.”