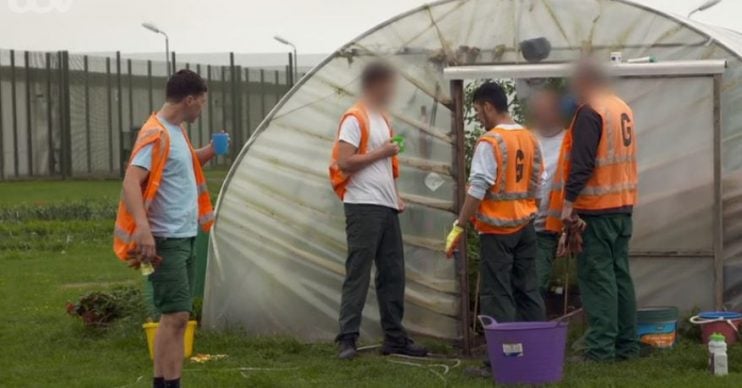 ITV viewers were left fuming over a prison documentary that appeared to show inmates living a “holiday camp” lifestyle behind bars.

In the latest episode of The Best Little Prison In Britain?, convicts at Jurby Prison on the Isle of Man were seen gardening and enjoying games of pool and badminton as they whiled away their sentences.

One scene showed a prison guard sitting with inmates and playing an acoustic guitar as they laughed and told him he should be on X Factor.

In another scene, an inmate nicknamed Whippy clocked up hours working in the prison’s garden to strengthen his application for early release.

In between preparing the plant beds and tending the greenhouses, the inmates stood around chatting and sipping hot drinks.

Elsewhere in the episode, Whippy and his pal Ian worked up a sweat as they played a game of badminton.

The pair reflected on the importance of having friends behind bars, with Ian telling the camera: “Because there’s so few lads, you make loads of mates in here. We’ve all got each others’ backs, haven’t we?”

Whippy chimed in: “If you’re just on your own, then you’re just going to make your time harder, aren’t you?”

In another part of the show, the inmates played pool.

“I’m always polite, always hard working but I’m [bleeping] round trying to make the days go quicker,” Whippy said, adding: “I’m the wing clown. Ever since I was in school, the teachers called me a lovable rogue.”

But on Twitter, it appears many viewers weren’t impressed by the atmosphere at Jurby Prison.

One said: “#bestlittleprison criminals in a holiday camp.”

Another tweeted: “Isn’t prison supposed to be a punishment? So far, I’ve watched inmates do the gardening, play table tennis and work in a kitchen. Missing something? #bestlittleprison.”

Someone else put: “#Bestlittleprison isn’t being in prison a punishment? What an insult to the victims! Shame on you @ITV.”

But others were much more on board with the way things are run at Jurby.

A fourth argued: “The attempts to alter ingrained behaviour and improve responsibility and decision-making amongst the offenders – these are adults going back out into a small community, not toddlers being put on the naughty step. It isn’t fun being up at Jurby, whatever this show says.”

And a fifth said: “Surely it makes more sense for them to be learning new skills and improving their education for their eventual release than being locked up in a cell for 23 hours a day?” 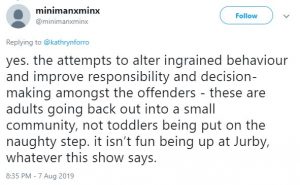 What do you think of The Best Little Prison in Britain? Leave us a comment on our Facebook page @EntertainmentDailyFix and let us know.