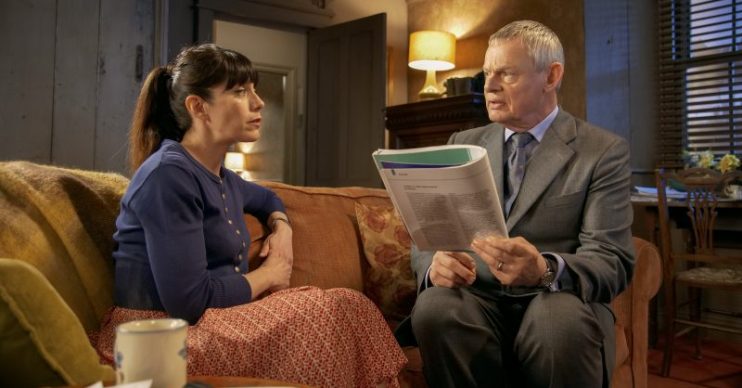 We haven't seen him since series two

Cosy drama Doc Martin, staring Martin Clunes, has brought back on old character who was in the show 13 years ago.

PC Mark Mylow has come back to Portwenn! The character, played by Stewart Wright, returned to the Cornish village for episode four.

The fourth instalment saw farm machinery stolen and Mark on the case to help find it.

The copper featured in the show’s first two series before he was replaced by Portwenn’s PC Joe Penhale (John Marquez).

Fans of Joe didn’t have to worry though, as Mark’s arrival didn’t put him out of the picture – far from it!

With the old copper back on the scene, viewers got to see the two of them forced to work together and put their humorous rivalry aside.

Viewers on Twitter were delighted, with one writing, “Well I’m loving having Mark Mylow back in #docmartin” and another tweeting, “Mark just wonderful”.

Well I'm loving having Mark Mylow back in #docmartin so nur. 😄

And didn’t they out do each other in ineptitude Mark just wonderful. I’m sure the Cornish Constabulary are much more efficient than our two joyous idiots #DocMartin

Doc Martin returned to our screens last month (25.09.19) for a ninth series, and fans couldn’t be more pleased.

After watching the first episode – during which a GMC representative arrived to assess the grumpy Doc (Martin Clunes) and his surgery – fans proclaimed the series to be the perfect show to watch.

Some on Twitter even described it as “just the right antidote” to all the gloomy news reports about Brexit.

The people have been so warm and welcoming to us.

Actor Martin, 57, has previously spoken about how much he loves filming the show.

In a chat with Digital Spy, the actor said: “We love going to Cornwall to make Doc Martin and we miss it when we’re not there.

“The county is so beautiful and the people have been so warm and welcoming to us.”

Long before series nine was confirmed, the former Men Behaving Badly star claimed the programme would end with its eighth series, in November 2017.

But in a later conversation with RadioTimes.com, to the delight of fans, he revealed he had decided to ‘un-end’ the show and was filming a new run of episodes.

He joked: “I’m un-ending it. We probably plan to do one every other year now…”

Actress Caroline Catz has returned as the Doc’s wife, Louisa, while Dame Eileen Atkins is reprising her role as Martin’s aunt, Ruth, and Ian McNeice as Bert Large.

Are you enjoying the new series of Doc Martin so far? Leave us a comment on our Facebook page @EntertainmentDailyFix and let us know what you think.