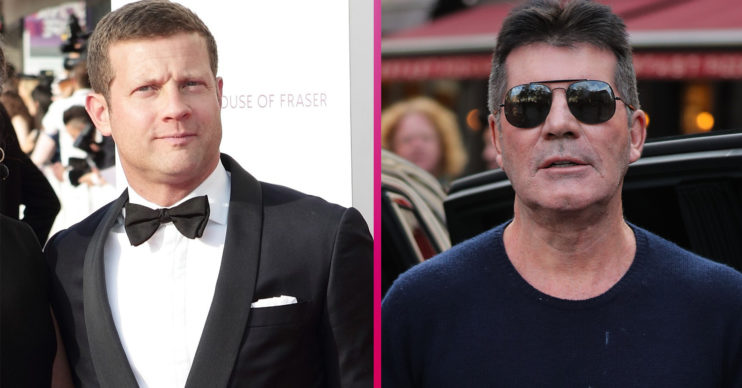 He confronted Simon over lack of screen time

Dermot O’Leary almost quit The X Factor over a lack of screen time.

The 47-year-old host has revealed he confronted Simon Cowell over how he was being used on the ITV talent show after being brought back in 2015.

However, the music mogul was able to win him over.

What did Dermot O’Leary say about The X Factor?

He told The Sun: “I’ve had my state-of-the-union meeting with Cowell as well. You’re watching the show one day and going, ‘I’m not in any of this’.

“He does that great Simon thing where you walk into his house and you’re like, ‘Stick to the plan, say what you want to say.’

“And then you sit down, you’re going through it and he goes, ‘Do you want some chicken pie?'”

Dermot admitted he enjoyed the meal of chicken pie, before telling Simon what he thought.

He said his boss instantly agreed.

You’re watching the show one day and going,’I’m not in any of this.’

During a talk for Ant and Dec’s autobiography Once Upon A Tyne, he added that “the most delicious chicken pie you’ve had in your life turns up”.

He explained that Simon agreed with him that he didn’t feature in the show much.

Meanwhile, Dermot also insisted Simon held up his end of the bargain, and gave him exactly what he’d asked for.

Dermot said Simon is a “man of his word” and he began appearing in The X Factor more.

The presenter admitted he then “felt part of the team”.

In addition, Dermot said Simon is a “great night out as well, terrific company”.

He added that “when you see that little sparkle and the gossip starts, he’s a world of fun”.

Leave us a comment on our Facebook page @EntertainmentDailyFix  and let us know what you think of this story.