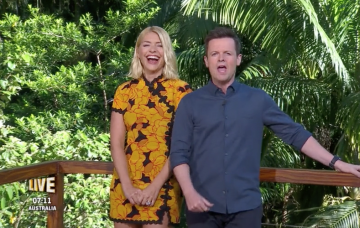 Host made a barbed joke at DIY SOS star's expense

Declan Donnelly took a cheeky swipe at I’m A Celebrity’s Nick Knowles by suggesting he’d be voted out first.

The host took aim at the DIY SOS star after a clip of the campmates sharing anecdotes about meeting the general public.

Nick said a viewer once approached him and said that he and his wife couldn’t stand him on television and had to switch channels whenever he was on.

The show then cut back to Dec who told co-host Holly Willoughby: “I love that, when they tell stories of meeting the general public.

Holly then interjected: “No, they won’t be watching. They can’t bear him on the telly.”

Then, with tongue firmly in cheek, he added: “Shouldn’t be long,” as the crew burst out laughing.

Read more: I’m A Celeb’s Nick Knowles accused of fibbing in the jungle

Of course Dec’s comments were all in jest.

It wasn’t the only funny dig Dec had at Nick on last night’s show.

During a bushtucker trial, Nick emerged from a chamber unaware he had an enormous spider on his head.

Dec whispered to Holly: “What do you call a man with a spider on his head? Nick Knowles.”

Later in the episode, Nick was seen in tears as he was one of only three campmates who didn’t receive a “care package” from home.

I’m A Celebrity… Get Me Out Of Here! continues on ITV at 9.30pm tonight.

Did you think Dec’s comments were funny? Leave us a comment on our Facebook page @EntertainmentDailyFix and let us know what you think!