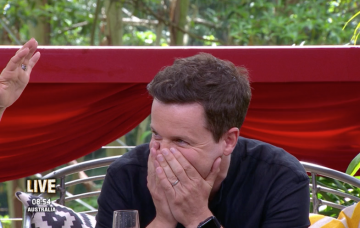 Presenter poked fun at his own stamina on ITV2's Extra Camp

Declan Donnelly dropped a saucy comment to Holly Willoughby, poking fun at his own sex life on I’m A Celeb spin-off Extra Camp.

The TV host joked that he lacked stamina as the pair played their final tongue-twister game of Willoughby, Wallaby Or Wobbly.

The pair are shown flash cards and must say one of the three possible answers based on whether the image is of Holly (“Willoughby”), a marsupial (“Wallaby”) or a jelly (“Wobbly”).

Holly went first and got a string of them right before eventually stopping the clock at an impressive 23 seconds.

His I’m A Celebrity… Get Me Out Of Here! co-presenter replied cheekily: “Well that’s your problem,” as the studio fell about laughing.

Dec, however, then proved he actually could last 23 seconds as he clocked the exact same time as Holly.

It wasn’t the only saucy comment on last night’s final show of the series.

Introducing the segment just moments earlier, Extra Camp host Scarlett Moffatt asked them: “Before we let you go, would you be up for a last blast of Willy… willy?! Willoughby, Wallaby Or Wobbly?

“I’m dead excited, I can’t get my words out,” she said of her gaffe.

Dec and Holly reflected on the series that was won by ex-football boss Harry Redknapp.

Viewers have loved Holly, who was standing in for Dec’s long-time on-screen partner Anthony McPartlin as he continues his TV break for personal reasons.

She has proven a match for Dec’s teasing and has been a hit with fans for her squeamish reactions during the bushtucker trials.

* I’m A Celebrity… Get Me Out Of Here! Extra Camp is available on the ITV Hub catch-up service.

What have you made of Dec and Holly this series? Leave us a comment on our Facebook page @EntertainmentDailyFix and let us know what you think!