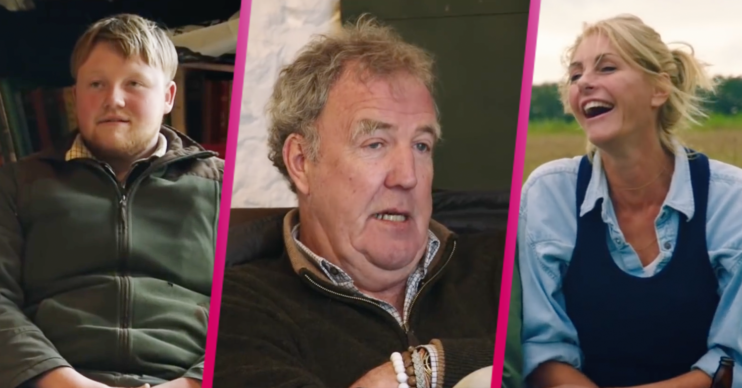 Clarkson’s Farm: 6 reasons why it’s the ONLY show worth watching on television right now

We're praying for a series 2!

So much so, even the former Top Gear host can’t quite believe it.

I’m genuinely amazed at the response to Clarkson’s Farm. Thank you all so much for your kind words.

Action centres on his Diddly Squat farm, in Chadlington, Chipping Norton, in the Cotswolds.

And if you haven’t watched it yet, here’s all the reasons why you should!

We can pretty much sum this up in two words – Kaleb Cooper.

The 21-year-old farmer is without a doubt the star of the show.

Kaleb appeared on This Morning earlier this week and told hosts Holly Willoughby and Phillip Schofield that while Jeremy thinks he’s the boss, it’s really him that’s in charge.

And, just a few minutes into the first episode, it’s easy to see Kaleb – who has a girlfriend and baby – is speaking the truth.

What we love most, however, is that youngster Kaleb is unafraid to put Jeremy – who has a reputation for being no-nonsense – firmly in his place with his quick-witted put downs.

Come on Amazon, sign him up for his own spin-off show!

Jeremy’s girlfriend Lisa Hogan, 46, makes various appearances in the show and she is, in fact, a part owner of the piece of land.

She’s always ready to muck in, helping to plant crops, paint the farm shop and, most importantly, keep her man in check.

Lisa is unafraid to tell 61-year-old Jeremy what she really thinks, and relishes the chance to tell him off – something us viewers love too!

She also proved to be quite the saleswoman when Jeremy had to shift sackfuls of potatoes when his farm shop opened.

Jeremy and his sheeps is a love story that’ll go down in history – until they end up in his shepherd’s pie.

On a whim he decided to buy a flock of what he calls “sheeps” – and it wasn’t long before they were wrecking havoc across the farm.

He attempted to keep them in check with a barking drone after hearing sheepdogs cost £20,000.

However, he soon had to hire a shepherd – who had two dogs – to look after the flock.

One of the most touching moments of the show came after Jeremy discovered three of his ewes couldn’t get pregnant – meaning they had to be put to sleep.

He took them to the abattoir, handed them over and signed the paperwork before asking if he could say goodbye.

Upon hearing that they were already dead, Jeremy welled up.

That was until he was given shepherd’s pie for dinner – and concurred they tasted delicious!

Lambing season on the farm was also lovely, with the star of the show delivering lambs in the dead of the night – and reuniting one lost lamb with its mum.

Sure to go down as the stuff of legends, Jeremy bought himself a Lamborghini tractor – an import from Germany – at a cost of £40,000.

When it arrived, it wouldn’t fit in the shed – and he has no idea how to work it as the instructions are in German.

And everyone – from Lisa to land agent Charlie Ireland, who Jeremy calls Cheerful Charlie – hated it, saying it was just too big.

The only person to be impressed was Kaleb, who saw it and exclaimed: “It’s a Lamborghini!”

However, even he’s gone off it, telly Holly and Phil this week he’d be happy if it stayed in the shed forever!

Combine harvester driver Gerald – who is no relation to Kaleb – has a vibrant character and thick country accent.

In fact, whenever he speaks to Jeremy, it appears as if the star of the show can’t understand a word he’s saying!

Jeremy’s bemused looks and vague grunts appear to signal that he might need the help of an interpreter.

Gerald promptly knocked it down with just one kick.

6. A real insight into farming

More than anything, the show highlights just how hard our farmers really work.

Kaleb explained the long hours he works while talking to Phil and Holly, and it’s clearly back-breaking work.

It’s also pricey – the cost of farming equipment and animal feed is extortionate – and the UK’s temperamental weather plays a huge part in the success of crops.

Will Clarkson’s Farm be back for a second series?

It appears it’s a case of “wait and see”.

Jeremy said: “Is there a second series? Who knows?

“I mean, nobody’s going to commission the second series without seeing how the first one does. So we will wait to see.”

Going on the hype from fans, we reckon series two is a shoo-in.

Head to our Facebook page @EntertainmentDailyFix and let us know if you’re watching the show.