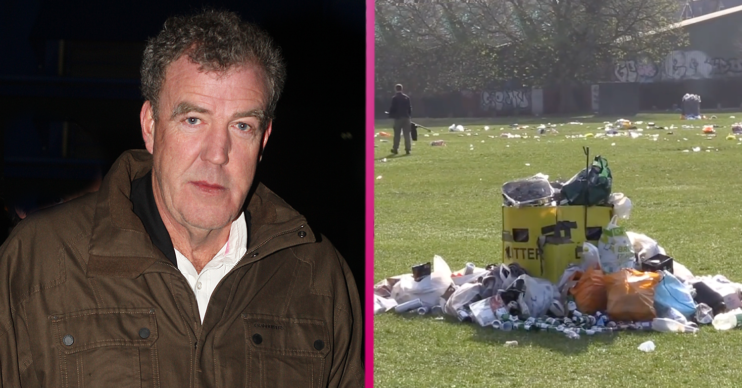 Jeremy Clarkson has reacted to pictures on the news over the weekend that showed Britain’s parks covered in litter.

With lockdown restrictions easing and the sun shining, the bank holiday weekend saw people flock to parks and beaches.

And they left behind what Jeremy has described as a “foot-deep blanket of litter”.

So what did Jeremy Clarkson say about the litter?

Like many others, Jeremy was repulsed by the amount of litter left in parks and on beaches.

However, he took quite the extreme view about what he’d do with those who drop litter, as well as companies who use “unnecessary” packaging.

Read more: Jeremy Clarkson says Meghan Markle will not bring down the monarchy

He said that every single day, on the scenic road that goes through his farm, people pull up, have their lunch and drive off, chucking their packaging out of the car window.

I have argued many times that the death penalty is barbaric and that it should not be used in a civilised country. However, an exception should be made for people who drop litter.

He said: “I’d love to know what goes through their heads when they do this, and fervently wish it was a bullet. I have argued many times that the death penalty is barbaric and that it should not be used in a civilised country. However, an exception should be made for people who drop litter.”

Jeremy added in his Sun column: “They should be taken behind the nearest bush and bludgeoned to death. No trial. No last words. Just instant death.”

The former Top Gear host also said that, if he were in charge, he’d reinstate the death penalty for “the boss of any company that uses unnecessary packaging”.

The CEO of Gillette seemed to be in the firing line, with Jeremy confirming he would be “human landfill”.

However, Jeremy added that he does have a solution to the litter problem.

He said that, two years ago, a Kent-based councillor wrote to Michael Gove.

The councillor suggested that prisoners should be made to clear up litter discarded at the side of the road.

And it appears Jeremy is fully on board with the idea.

He said: “So yes, let’s bring out the prisoners, chain them together and tell them to crawl up and down the side of the road on their hands and knees picking up all the litter and the condoms and the dirty nappies and the used tampons.”

He added that if they find a “half-eaten biscuit” it could be their lunch!

So what do you think of Jeremy’s comments? Head to our Facebook page @EntertainmentDailyFix and tell us.