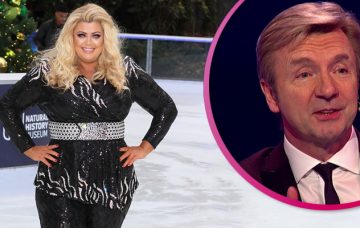 She has a lot of confidence ahead of the new series

Dancing On Ice’s Christopher Dean has warned Gemma Collins that she won’t turn into a professional skater overnight.

Former TOWIE star Gemma oozed confidence in a trailer for the brand new series and insisted she believes she’s going to win it.

However, professional skater Chris has said Gemma has “got the talk” but he wants to see if “the talk translates to the skate”.

In the trailer, Gemma said: “[Jayne] Torvill and Dean, you’re gonna take a step to the left, because I am about the win the Bolero Cup.”

It comes after Gemma, 37, promised she’ll be like Beyoncé on the ice.

Phillip Schofield and Holly Willoughby will return to present Dancing On Ice.

The brand new series will return in January with the likes of former EastEnders actor Richard Blackwood and Westlife’s Brian McFadden also taking to the ice.

Are you looking forward to seeing Gemma on the ice? Leave us a comment on our Facebook page @EntertainmentDailyFix and let us know what you think!