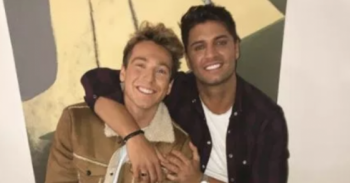 He opens up on "gentleman" Mike

The words “In memory of Mike Thalassitis 1993 – 2019” were written underneath a picture of Mike at the end of the show. He was found dead on Saturday, aged 26.

He found fame on the 2017 series of ITV’s Love Island, earning the nickname “Muggy Mike”, and was on E4’s Celebs Go Dating in 2018, along with Made In Chelsea star Sam.

Sharing a picture of Mike on Instagram, 26-year-old Sam said he hadn’t planned to post but wanted “everyone to know the kind of guy I saw in Mike.”

He said: “A person just died. A friend just died. Someone that I know in my heart of hearts I could have done more for. I met Mike on celebs go dating.

“I was told he was joining the show with me and my heart sank. I had heard all of the things said about this so called lothario.

“This cock sure arrogant guy, who was fresh out of love island and ready to steam roll this dating show that i was so terrified to join.

He went on: “What happened next surprised me. He came over to me, handed me a drink, apologised for not saying hello earlier, told me he was terrified and said he couldn’t wait to hang out more.

“I stood there rather ashamed at how badly I had just judged a book by its cover.”

Reality star Sam said the “shame only grew” as time went by and he realised Mike was “one of the most polite gentlemen I had ever met.”

“Not once was he crass about anything that happened, or bitter about how it all ended,” he wrote, adding: “What I did see that I believe he was trying to hide when he was telling stories of how ‘muggy mike’ was born, was sadness.

“From what I heard, he went into this show he knew practically nothing about, late, and into a pack of Alpha males who wanted nothing more than to win, and gain all the bonuses that that entailed. It wasn’t easy for Mike in that villa.”

Police have said the death of the former Love Island contestant and semi-professional footballer is not being treated as suspicious.

A statement from the Metropolitan Police said: “Police were called to a park near Latymer Way, N9, at 9.28am on Saturday, March 16 to reports of a man found hanged.

“At this early stage, the death is not being treated as suspicious. Police are in the process of informing the man’s next of kin. A file will be prepared for the coroner.”