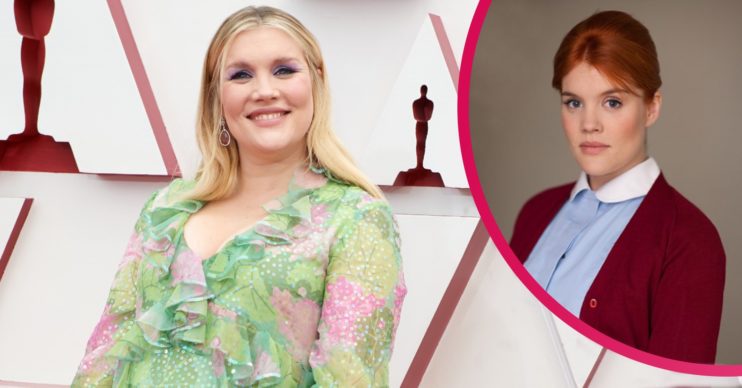 Former Call the Midwife star Emerald Fennell has just won an Oscar – but what did she win it for and how is she famous?

The actress turned writer did Britain proud at the Academy Awards on Sunday night (April 25 2021).

Here’s everything you need to know about Emerald and her career!

Who is Emerald Fennell? What is she famous for?

First of all, she appeared in films such as Anna Karenina in 2012 and The Danish Girl in 2015.

But TV viewers will recognise her for her roles in Call the Midwife and The Crown.

She also appeared in the C4 sitcom Chickens with Simon Bird, Joe Thomas and Jonny Sweet.

Emerald went on to become lead writer on the second series of Killing Eve in 2019.

She earned two Primetime Emmy Award nominations for her work.

She went on to write, direct and produce the 2020 thriller Promising Young Woman.

The star of the film, Carey Mulligan, has called Emerald “the smartest person I know”.

Watch out for her next film Zatanna, which is due out next year.

Who did Emerald Fennell play in Call the Midwife and The Crown?

Emerald portrayed Nurse Patience ‘Patsy’ Mount from 2013 to 2017 in Call the Midwife.

Patsy first appeared as a minor character in series two, where she was a nurse in the male surgical wing.

She returned as a main character in series three where she joined Nonnatus House and became roommates with Beatrix Franklin.

In series four, it was revealed that Patsy was in a secret same-sex relationship with Delia Busby, a nurse whom she had previously worked with at The London.

Patsy left in series six after hearing that her dad was dying and was last heard of travelling the world with Delia.

Emerald also starred as Camilla Parker Bowles in the Netflix drama The Crown.

What did Emerald Fennell win an Oscar for?

She was nominated in the Best Picture, Best Director, and Best Original Screenplay categories.

Most noteworthy, perhaps, is that Emerald is the first British woman to be nominated by the Academy for directing.

The film stars Carey Mulligan as a young woman, scarred by a tragic event in her past.

Finally, she seeks revenge against those who crossed her path.

How can I watch Oscar-winning Promising Young Woman?

Promising Young Woman is available to watch On Demand via all the major providers.

The film arrived on demand on January 15 and became available to purchase on Digital on March 2.

How old is Emerald and where is she from?

Emerald Lilly Fennell was born on October 1 1985 in Hammersmith, London.

She is currently 35 years old and riding high…

And can we just pause a moment to admire how cool her name is!

Is Emerald Fennell married? Who is her husband?

The couple have a son, born in 2019, and are currently expecting their second child.

The writer and actress is currently heavily pregnant.

Call The Midwife Oscars The Crown