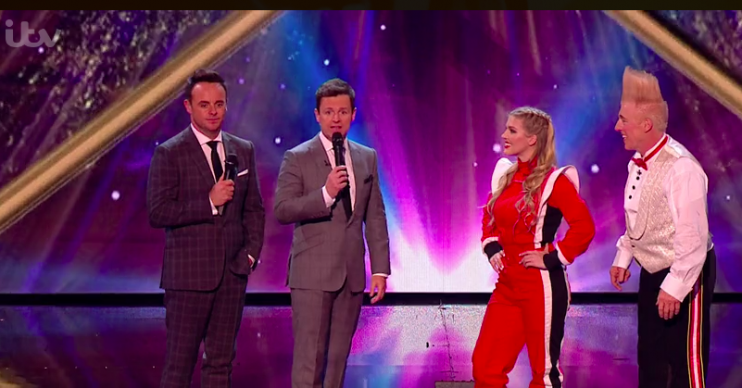 Dec welcomed his first child into the world last year

With much fanfare Britain’s Got Talent: The Champions kicked off last night on ITV.

And while there was certainly plenty to talk about – from Ashleigh returning with her new dog Sully to Paul Pott’s ‘sulky’ performance – fans still didn’t miss the adorable moment Dec mentioned his baby daughter.

“I’ve got a daughter and I get nervous just doing piggy-backs with her.”

Viewers took to Twitter to share their delight at Dec’s brief but very sweet mention of his baby girl Isla.

It so was, so flipping cute

I know how cute.

Dec and his wife Ali welcomed their firstborn, daughter Isla Donnelly on September 1, 2018.

The little tot has been kept out of the spotlight, apart from an adorable snap shared on social media that shows the baby’s hand grasping on to Dec’s finger.

‪Ali and I are thrilled to announce the arrival of our baby girl, Isla Elizabeth Anne, who was born just after 9 o’clock this morning. Mother and daughter both doing well, Dad is head over heels! D x

He told the Evening Standard last year that the reality of being a new dad had come as quite a shock:

“No one tells you how hard being a parent is! We could have had a warning!

“It is literally the hardest thing I’ve ever done but I’m loving it,” he said.

Did you catch Dec’s sweet mention of Isla? Tell us what you think on our Facebook page @EntertainmentDailyFix.