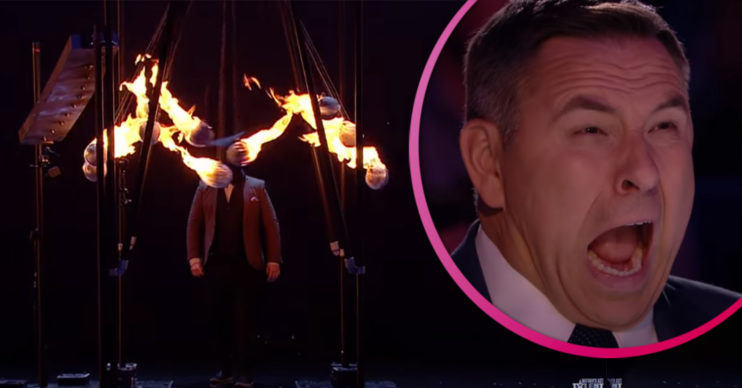 The act leaves the judges fearing the worst

ITV has revealed a glimpse at a death-defying stunt on BGT which almost left the act severely injured.

Scientist Kevin Quantum will appear on Saturday’s show (April 25) to try and wow judges with his performance.

He will attempt to walk through a giant harmonic pendulum, which he sets on fire, as doctors stand by.

A teaser on the official BGT YouTube page teased what’s in store.

In the clip, Kevin says: “These cannonballs will career across the stage taking out literally anything in their path.

Ladies and gentleman, I need complete faith and science.

“When that happens I will attempt to walk through them without being struck.”

He continues: “Now Simon [Cowell] I know you like a bit of drama so tonight we will be setting these cannonballs on fire.

“Ladies and gentleman, I need complete faith and science.”

Kevin then puts on a blindfold and begins to walk while cannonballs, which are set on fire, swing towards him.

However, they start swinging out of sync sparking concern among those watching.

Fears among the hosts and judges

Hosts Ant McPartlin and Dec Donnelly ask: “That’s not right is it?”

Judge Alesha Dixon asks: “Is he going to run?” as Amanda Holden covers her mouth.

Before his performance, Kevin reveals to the audience that his pregnant wife is just ten days away from giving birth.

A source has told The Sun: “It’s a routine Kevin has clearly done hundreds of times before, but as he began to walk blindfolded through the pendulum, one of the balls got out of sync and it became very risky.

“He managed to get through it without a scrape, but had a ball hit him it would have killed him.

“Not only were they on fire, but they weigh a huge amount. The judges couldn’t believe it when he said his wife was about to drop too.

“He nearly did not make it back to her. Kevin is a very lucky boy.”

Britain’s Got Talent airs on ITV, Saturday, April 25, at 8pm.