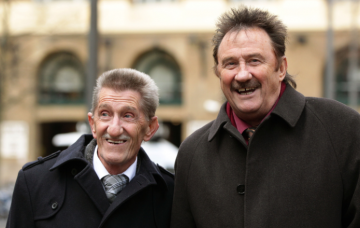 Bafta under fire for snubbing Barry Chuckle during In Memoriam segment

Brother Paul has spoken of his disappointment

During the ceremony, an In Memoriam segment paid tribute to the showbiz stars who’ve died in the past year.

But there was no mention of Paul’s older brother Barry – a former BAFTA Award winner – who died last August following a period of ill health.

And Paul, 71, took to social media following the event to vent his frustration at the omission.

After a Chuckle Brothers fan issued an angry tweet about the snub, Paul gave it his backing.

The 71-year-old wrote: “I quite agree, my friend. We received our BAFTAs ten years ago. He should have been mentioned.”

And other viewers were equally disgruntled by BAFTA’s decision.

One tweeted: “What happened to Barry Chuckle during your In Memoriam section of last night’s BAFTAs?”

Another added: “@BAFTA I hope you are going to issue an apology for leaving Barry Chuckle out of the In Memoriam segment last night?”

And a third chipped in: “Sorry, BAFTA, though I am loving the show, surely you omitted Barry Chuckle from those we lost in the last year. A much-loved TV stalwart of 20 years plus.”

They went on to present their own children’s TV series, Chucklevision, and were known for catchphrases including: “To me, to you.”

The brothers were recognised for their success with a BAFTA Children’s Award in 2008.

Sadly, though, Barry died last year from bone cancer. Paul responded to the news by saying: “I’ve not just lost my brother, I’ve lost my theatrical partner of many, many years and my very best friend.”