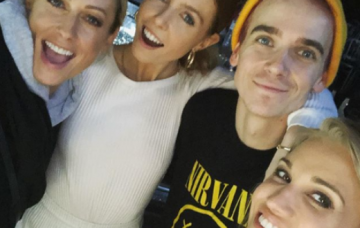 They are both in it to win Strictly tonight

Strictly Come Dancing finalist Ashley Roberts has denied that taking dance classes as a child gave her an unfair advantage in the competition.

The former Pussycat Dolls star has faced criticism that her performance background gave her a head start over the other celebrities on the BBC One show.

The 37-year-old has consistently scored towards the top of the leaderboard but, despite this, has ended up in the dance-off for the last three weeks in a row.

Speaking on BBC One’s Breakfast programme, Ashley said: “I did have dance (classes) when I was younger. It was a completely different style, and it’s been over 20 years, really, since I’ve trained.

“So, listen, I absolutely love that I got asked to be here. I’m so grateful that I’ve got to learn Latin and ballroom. It’s been an amazing journey.”

Steps star Faye Tozer has also faced claims that being in the chart-topping pop group had helped her attain higher scores.

The singer, 43, said the fact the show featured a range of different skill levels should be celebrated.

She said: “With every Strictly series there’s always been a mix of abilities, absolutely, but it’s an entertainment show at the end of the day and I think it’s been really lovely to see everybody’s individual journey.

“It’s been amazing to be part of the celebrities.”

The Strictly Come Dancing final airs at 6.30 on BBC One.

How do you think will win? Leave us a comment on our Facebook page @EntertainmentDailyFix and let us know what you think.