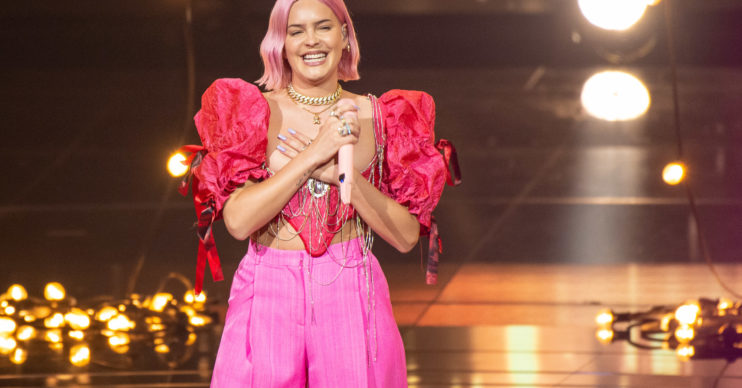 Anne-Marie joins The Voice UK as new coach: Who is she and who has she replaced?

Anne-Marie Nicholson has joined The Voice UK as a new coach.

The British singer-songwriter, 29, will replace Meghan Trainor in the new series of the ITV talent show.

Here’s everything you need to know about the Essex-born artist.

Read more: The Voice Kids Final: Emma Willis teary-eyed at Will.i.am’s comments about Victoria and being a dad

Who is Anne-Marie Nicholson?

Anne-Marie is an Essex-born singer and songwriter, aged 29.

She sang on Clean Bandit‘s Rockabye, alongside Sean Paul, which reached number one in the UK single chart.

Her debut studio album Speak Your Mind was released on 27 April 2018, and peaked at number three on the UK Albums Chart.

The singer was nominated for four awards at the 2019 Brit Awards, including Best British Female Solo Artist.

Where is Anne-Marie from?

Anne-Marie was born and raised in East Tilbury in Essex.

She has one sister, Samantha.

She also attended Palmer’s College in Thurrock as a teenager.

Read more: Meghan Trainor divides viewers during her debut as coach on The Voice UK

How old is Anne-Marie?

She was born Anne-Marie Rose Nicholson on April 7 1991.

How did Anne-Marie get famous?

Anne-Marie started a career in music and showbiz when she starred in two West End productions when she was a young child.

She appeared in Les Misérables at the age of six, and Whistle Down the Wind alongside a young Jessie J when she was 12.

The ambitious woman cut a solo demo for Rocket Records in 2013 called Summer Girl, and guested on tracks by Magnetic Man, Gorgon City and Raized by Wolves.

She caught the attention of drum and bass band Rudimental and they asked Anne-Marie to join them as a vocalist.

She featured on four tracks on their album We the Generation, and spent two years touring alongside them.

She became the biggest-selling debut artist of 2018 with her debut album, Speak Your Mind.

One year later, Anne-Marie released Alarm, the first single from her debut album.

Anne-Marie revealed that she is attracted to both men and women in 2018.

She hasn’t spoken publicly about her love life since 2016.

At that time, she was in a relationship with someone from the music industry.

On the Confidential on Nova radio show in May 2016, she said of her boyfriend: “I can’t say because he is quite well known.

Who will Anne-Marie replace on The Voice UK?

Anne-Marie joins The Voice UK for series 10, which begins on ITV on Saturday January 2 2021.

She will replace Meghan Trainor, who stepped down from the show after announcing she is expecting her first child with husband Daryl Sabara.

Anne-Marie said: “I am SO excited to join Sir Tom, will.i.am and Olly Murs as the new coach on The Voice UK.

“I can’t wait to work with incredible undiscovered talent! Wahoooooo!”

The winner of The Voice UK secures a recording contract with Universal’s label UMOD.

When is The Voice UK back?

Series 10 of The Voice UK will return to ITV on Saturday January 2 2021, with 12 episodes featuring The Blind Auditions, The Battles, Semi-Finals and Final.

A new format will also be introduced to the show, called The Block.

During The Blind Auditions, the four coaches will each have the opportunity to stop a fellow coach from adding a singer to his or her team.

Each Coach will get only one chance to use their ‘Block’ in the hope of trying to secure the best team possible – and weaken the chances of the other coaches.

What do you think of the new coach? Leave us a comment on our Facebook page @EntertainmentDailyFix.