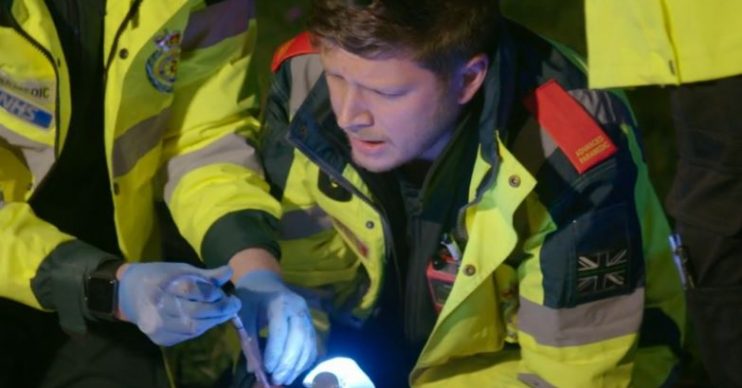 Jordan had been wearing a helmet

BBC One documentary series Ambulance had viewers in bits with scenes of a motorcyclist who died after being thrown 30 feet in a road accident.

In last night’s episode (July 4), North West Ambulance teams responded to reports of a collision between a car and a young man on a motorbike.

On arrival, they found the patient had an airway filled with blood and severe head and facial injuries.

Emergency crews intubated the man and got him in an ambulance, with advanced paramedic Luke explaining: “I’ve seen the damage to his helmet. He’s had his helmet on but it’s just imploded. He needs blood. He needs surgery.”

Having left the patient in the hands of the doctors at the hospital, Luke took a breather and reflected on the job at he updated a colleague over the radio: “The gentleman is in for a scan at the moment. He’s got quite massive, I think, haemorrhages. A fractured pelvis.

“He’s quite unwell but definitely the right thing to send me over there. It was a very difficult scene.”

But an update at the end of the programme revealed that the motorcyclist, named Jordan, tragically succumbed to his injuries.

A message on the screen read: “The patient Luke treated at the roadside died in hospital two days later. His family are working to raise awareness of motorbike safety.

Reacting to the update on Twitter, one viewer said: “So sad to hear about Jordan, that was a terrible scene. #ambulance.”

Another tweeted, alongside a crying emoji: “RIP Jordan #Ambulance.”

A third wrote: “So sad, RIP Jordan. Heart going out to the family #Ambulance.”

A fourth commented: “Upsetting update on the motorcyclist. Rest in peace Jordan #Ambulance.”

So sad to hear about Jordan, that was a terrible scene. #ambulance

So sad, rip Jordan 😥 heart going out to the family 😥#Ambulance

Upsetting update on the motorcyclist. Rest in peace Jordan #Ambulance

Someone else said: “How sad that Jordan lost his life. May he rest in peace #Ambulance.”

“Such a sad outcome. RIP Jordan, you were far too young,” tweeted a sixth, adding: “Thoughts are with your family xx.”

How sad that Jordan lost his life. May he rest in peace 💔😥 #ambulance