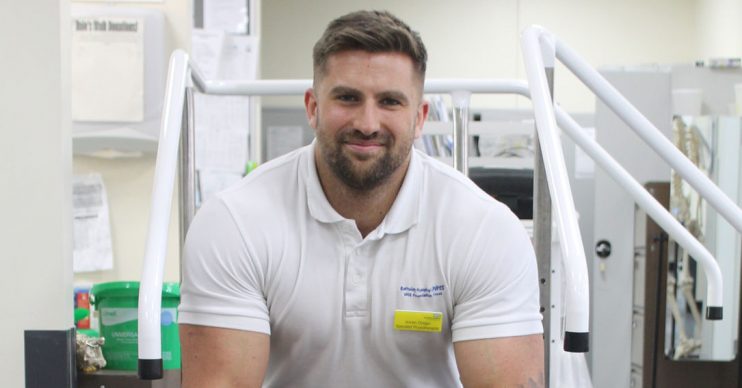 The size of him

Fans of Channel 5 documentary series Casualty 24/7 have taken to social media to swoon over the programme’s “very attractive” physio.

After last night’s episode (July 3), a number of viewers came to realise that they need more of Jovan, a muscular physio at Barnsley Hospital, in their lives.

Taking to Twitter, one viewer said: “[Bleeping] hell. I just fell over… the physio guy from #Casualty247 needs to come help me. Quick. Right now.”

Another tweeted: “I’ve suffered for years with a bad knee… I think I need physio… I would like Mr Bodybuilder #Casualty247.”

A third wrote: “Someone please find me the name of the very attractive physio guy on #Casualty247 please I will pay you.”

Someone else said, “I’d never be well enough to be discharged if Jovan was my physio #Casualty247”, then added: “I’m 48 and I struggle to walk. I wonder if Jovan could work his magic on me?” 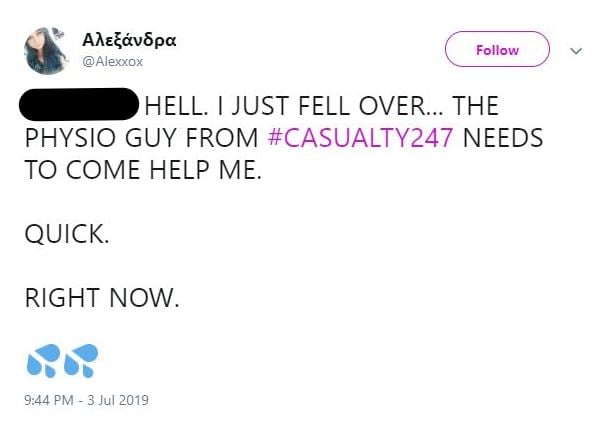 During the latest episode of Casualty 24/7, Jovan was assigned to mini-stroke victim Audrey, who was in the clinical decisions unit after a fall.

He had to assess whether or not the 90-year-old was able to go home.

Jovan explained: “She stood up from a chair and fell backwards, knocked the back of her head.”

Speaking to the camera, he said: “I’m just going to throw this out there, I think women are better with pain. Not even going to lie.

“Most of the patients that I see, the women are much more tolerant of painful treatments than men. And I can say that as a man.”

The programme explained that Jovan treats patients at clinics throughout Barnsley by day, pursuing his love of bodybuilding by night.

He said: “I left school and I did building work, because my dad was a builder. Then I fell into a job working with people with brain injuries. I thought, this is really interesting and something I could do.”

A university mate got him into bodybuilding, although he didn’t think he could do it at first.