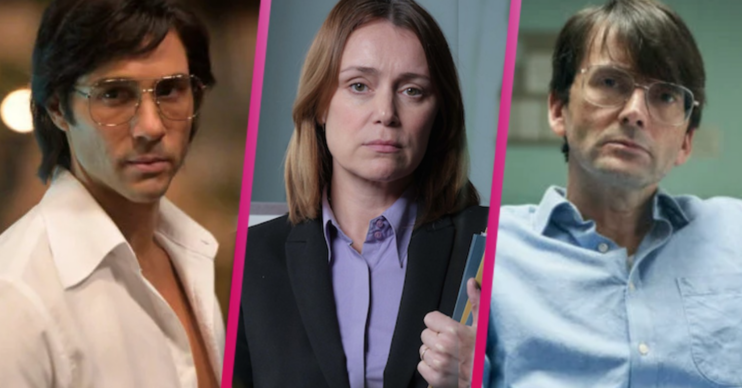 This little lot should take care of your true-crime fixation

And, during these past few years, we’ve noticed a trend: increasingly, lots of crime dramas are based on true-life crimes.

So what are the best crime dramas based on real-life events to stream right now?

We’ve got all the details…

Nilsen brutally slaughtered as many as 15 young men in the 1970s and 80s in north London.

This series won plenty of plaudits, not least for David’s magnetic performance as the killer.

When They See Us, Netflix

In the spring of 1989, five young African-American boys were arrested for the rape of a white woman in New York City’s Central Park.

Known as the Central Park Five, they were incarcerated in some of the toughest prisons in the US.

But when their case was overturned decades later, it became one of the worst miscarriages of justice the country had ever seen.

Unbelievable tells the story of a young woman who comes to the police saying she’s been raped.

However, the police don’t believe her.

It’s only when two female detectives looking into serial cases of sexual violence in the states of Washington and Colorado that her case is taken seriously.

This ITV series from 2011 still stays fresh in the memory.

It stars Dominic West as notorious serial killer Fred West, and Emily Watson as her ‘appropriate adult’ – someone who’s present during police interviews.

Based on real-life events, Mindhunter goes back to the 1970s and a young FBI.

Two operatives and a psychologist set up the Behavioral Science Unit within the Training Division.

Together they interview some of the US’s most feared serial killers.

Why? They hope to build up psychological profiles of killers to stop more springing up in the future.

Also on the list of really good crime dramas is this dark gem which was recently repeated on ITV and set in the 1950s.

On his tail is Detective William Muncie (Douglas Henshall) who becomes obsessed with bringing him to justice.

Most recently on BBC One and now on Netflix, The Serpent transports us back to mid-1970s Thailand.

It tells the story of the chameleon-like Charles Sobhraj (Tahar Rahim), who murdered at least 20 tourists.

Also in the cast is Jenna Coleman who stars as his girlfriend, Marie-Andrée Leclerc.

Our list of really good crime dramas continues with this harrowing drama delves into the world of honour killings.

Soon she’s transported into a world of different customs, cultures and a terrifying code of honour.

It starts with the shocking murder of the head of one of the most famous fashion houses in the world.

With Gianni Versace dead on the steps of his lavish Miami mansion, a manhunt ensued.

What the series uncovers is the story of an unhinged serial killer called Andrew Cunanan.