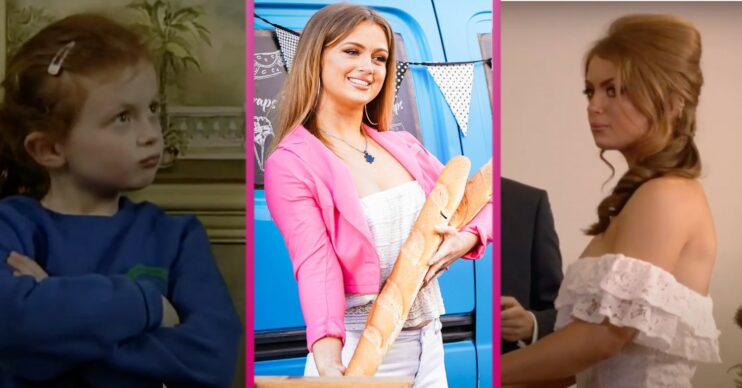 Who is Tiffany Butcher-Baker in EastEnders? Who are her soap icon parents?

She's related to some of the most legendary families in EastEnders history!

Tiffany Butcher-Baker in EastEnders is not just part of the show’s iconic Butcher clan.

She’s also a member of the Jackson/Branning family and related – by marriage – to the newer but equally iconic Taylor/Baker clan.

What a dynasty to be part of!

Who are Tiffany’s parents?

Tiff’s the daughter of classic EastEnders couple Bianca Jackson and Ricky Butcher. And she’s named after B’s former best friend Tiffany Mitchell, who died back in 1999.

When Tiff first arrived in the show as a little girl, she thought she was Nathan Dean’s daughter – and Whitney Dean’s half-sister.

Nathan was Bianca’s boyfriend who had been killed in an accident when she was pregnant.

But as it turned out, he wasn’t Tiff’s dad after all and Tiff was the result of a one-night stand between Bianca and her childhood sweetheart, Ricky.

Who plays Tiffany Butcher-Baker in EastEnders?

Tiffany Butcher-Baker in EastEnders is played by actress Maisie Smith.

Maisie joined the show in 2008 when she was just six years old having already played the young Elizabeth I in the film adaptation of The Other Boleyn Girl.

She scooped the Best Dramatic Performance from a Young Actor or Actress in the British Soap Awards in 2009.

In 2020, Maisie appeared in Strictly Come Dancing partnered with Gorka Marquez. She reached the final, but lost out to Bill Bailey and Oti Mabuse.

Tiffany was a popular addition to the EastEnders cast from the moment she arrived with Bianca and her siblings.

She got herself into all sorts of scrapes, clashed with Dotty Cotton, had a cute romance with Bobby Beale, and revealed that her grandmother, Carol Jackson, was having an affair with sister Whitney’s boyfriend Connor.

Tiff eventually moved to Milton Keynes with her mum and stepdad Terry Alderton.

She came back to Walford for Whitney’s wedding to Lee Carter, but went back to Milton Keynes.

When did Tiffany return to Albert Square?

Tiff timed her return to perfection – just as big sis Whitney was about to leave.

Whitney changed her plans and Tiff stayed in Walford.

But she got into trouble almost immediately, lying about her mum’s mental health to make Whitney welcome her back to London, and hanging out with older boys.

She even posted a photograph of baby Harley online which led to the tot being kidnapped by his birth family.

Whitney wanted her sister to go back to Milton Keynes after that, but Arshad – the baby’s foster dad – persuaded her to let Tiff stay.

Was Tiffany the victim of sexual abuse in EastEnders?

After Shakil Kazemi was stabbed and killed, Tiffany was in a bad way. She started a relationship with gang member Jagger Rawley who began grooming teenage Tiff along with Evie Steele.

The nasty pair got Tiffany to deliver and sell drugs for them and she got into their debt, when instead of delivering some drugs to Keegan Baker -who she had a secret crush on – she destroyed them.

But that meant the gang wanted Tiffany to do more of their dirty work for them. She got drawn deeper into their criminal activities. And she ended up being raped by another gang member, Fraser.

With the support of her uncle Jack Branning, Tiffany bravely confronted her rapist and began putting her awful experience behind her.

What’s the latest with Tiffany Butcher-Baker and Keegan in EastEnders?

When Tiffany and Keegan got together, no one was convinced that the troubled teenagers would make things work.

Read more: Who is Isaac Baptiste in EastEnders and what is his mental health battle?

But they seemed to bring out the best in each other, and soon they had decided to make it official and tie the knot!

With them both too young to wed without parental permission, the cute couple headed to Scotland with Tiff’s bestie Bernie Taylor – who is also Keegan’s sister – and Keegs’ brother, Keanu Taylor.

When Sonia and Karen listened to Keegan declaring his love, they were won over and the teens said “I do”.

Married life wasn’t plain sailing, at first, but now the pair are living with Sonia (and Dotty) and working hard on their plans to take over the business world.

But with Keegan’s catering company taking off, Tiffany’s beginning to feel left behind and she is making some pretty foolish decisions in an effort to keep up.

Is this going to drive a wedge between Walford’s most loved-up couple?