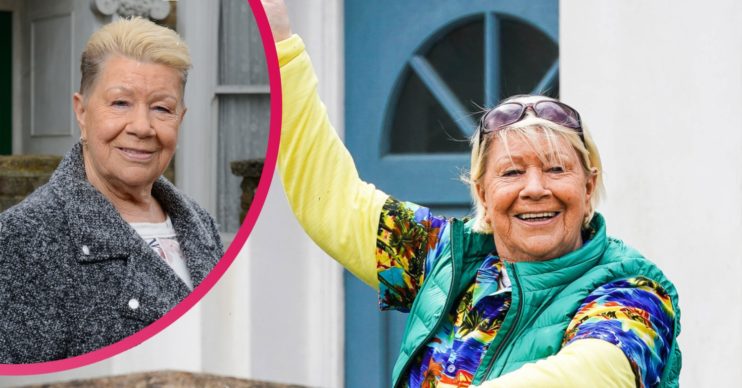 Who is Mo Harris in EastEnders and what’s the truth about her and Fat Elvis?

She's definitely made her mark on Walford in her years in EastEnders!

Mo Harris in EastEnders is – despite her name – the head of the Slater clan. She’s the scheming, entrepreneurial, kind-hearted matriarch with an eye for a deal and a very colourful love-life with on/off partner Fat Elvis.

Mo’s linked to the Slater brood through marriage. Her daughter, Viv, was Charlie Slater’s wife and mum to the sisters Lynne, Kat, Little Mo and Belinda.

Like the others, Stacey Slater calls Mo “Nan” but actually she and Mo aren’t related by blood. Stacey was Charlie’s great-niece on the Slater side of the family.

Mo arrived in EastEnders in 2000, with the rest of the Slaters, and stayed until 2016. She returned in 2018 but will soon be putting on her deck shoes and heading off into the sunset with Fat Elvis, who’s invited her on a cruise.

Though Mo only arrived in Walford on screen in 2000, she grew up locally and she had a lifelong rivalry with her one-time best friend Pat Evans/Butcher. In fact, she even appeared in a spin-off show in 2004, EastEnders: Pat and Mo, telling the story of the two friends as young women.

Who plays Mo Harris in EastEnders?

Mo is played by Laila Morse. Her real name is Maureen Oldman – known as Mo – and she is the sister of actor Gary Oldman.

Laila didn’t start acting until she was 51, when she made her screen debut in Nil By Mouth – written and directed by brother Gary. She went on to play roles in The Bill and Great Expectations among others, before being cast as Mo in EastEnders.

She’s also appeared in I’m A Celebrity, Dancing on Ice and Celebrity Masterchef.

But Laila isn’t the only actress to play Mo. Her Enders co-star Lorraine Stanley, who now plays Karen Taylor, took on the role for the 2004 spin-off EastEnders: Pat and Mo.

Mo and her dodgy deals

As soon as she arrived in Albert Square, Mo was getting up to no good. She was soon selling stolen goods, provided by her sometime boyfriend Fat Elvis, and even set up a sex chatline. When Stacey married Bradley Branning, Mo tried to sell their wedding presents.

Mo’s got no shame. When Lucas Johnson was convicted of murder, she sold his Bibles as macabre souvenirs and she ran a book taking bets on the identity of Archie Mitchell’s killer.

She claimed benefits in Jean Slater’s name, faked her own death and even stole the money left to Kat Slater by her rapist uncle Harry.

Worst of all, it was revealed that teenage Kat had twins. She had thought she only had one baby – daughter Zoe – but she was shocked to discover she’d had a son, too. And Mo had known all about it. For a long time, the discovery drove a wedge between Kat and Mo, but the pair have now buried the hatchet.

For YEARS EastEnders fans were in the dark about Fat Elvis. We only knew what Mo told us about him and the dodgy goods he sent her way – most recently a bumper batch of one-eared chocolate bunnies that the Slater kids got for Easter!

Mo and Fat Elvis were like star-crossed lovers. They went to Spain together for a while and they seemed made for each other – though he never appeared in Walford.

And then Mo stunned her family by announcing she and Fat Elvis were getting hitched!

He appeared on screen once, played by Shenton Dixon, as he and Mo planned their wedding.

The happy couple left for pastures new, but when Mo returned, she came alone – Fat Elvis had left her for his probation officer. What a rat!

Fortunately the pair have since reconciled and now he’s persuaded Mo to leave Albert Square once more to head off into the sunset with him.

Will Mo ever return?