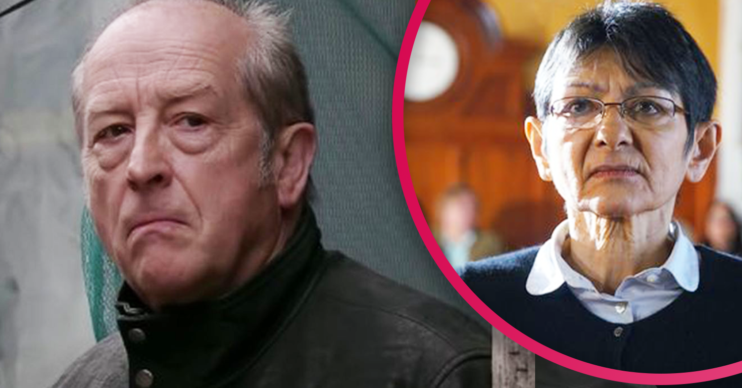 When does Geoff get found out in Coronation Street? ITV boss speaks out

Coronation Street fans are desperate to see Geoff Metcalfe get his comeuppance.

Yasmeen Nazir (Shelley King) is currently looking at serious time behind bars because of his twisted lies and manipulation.

So when does Geoff get found out in Coronation Street?

When does Geoff get found out in Coronation Street?

Geoff (Ian Bartholomew) is going to get exposed as the villain he really is later this year.

It would have been sooner but scheduling changes due to coronavirus have caused a delay.

READ MORE: What happened to Tim’s mum in Coronation Street? Geoff’s past is coming back to haunt him

Corrie boss Iain MacLeod said: “The timelines have been shunted due to the lockdown but I think it’s fair to imagine that it will be this year.

“What form that comeuppance is is in discussion.”

He added: “We wanted a redemptive ending for Yasmeen obviously and the toughest it’s going to get for her is over the next months.

“It’s towards the end of the year but the key thing is to impart the right message.

“For the sake of the people it has impacted we have to tell the right ending with some positivity.”

What will happen to Geoff in Coronation Street?

Corrie worked very closely with domestic abuse charities to make sure Yasmeen’s story was told as accurately as possible.

In doing their research, the ITV team discovered that “perpetrators have a cyclical pattern of behaviour”.

READ MORE: What happens next as Yasmeen pleads not guilty in Coronation Street?

“It would be highly unlikely that Geoff had never committed these behaviours previously,” Iain explained.

“We will really explore Geoff and Tim’s backstory. It’s a good opportunity to find out about Tim’s family background.

This could very well mean that the truth about Tim’s mother Tessa.

Although she has never appeared in Corrie before, Geoff has hinted that she was abusive towards him.

However, actor Ian has hinted that the truth is quite the opposite.

“On the face of it it’s very straightforward,” he said.

“But I think because he has kept the details of the relationship with Tim’s mother as his own version, it has been airbrushed and is always from Geoff’s point of view.

“Tim only knows his mother from Geoff’’s point of view. There is a whole wealth of stuff to explore.”