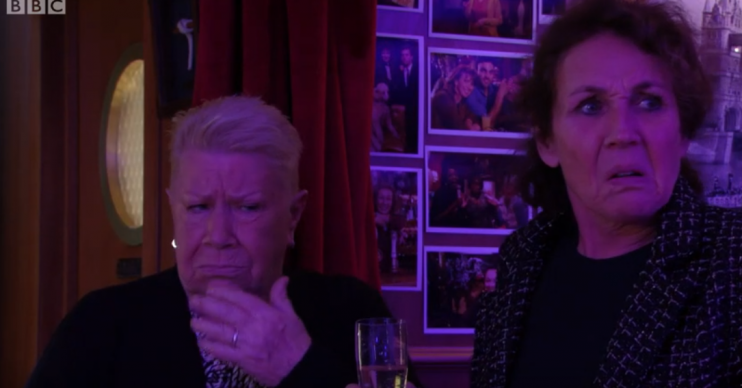 Tracey and Phil spent the night together

Fans of EastEnders were left in fits of laughter on Monday night as Tracey the barmaid revealed she had had a night of passion with Walford hardman Phil Mitchell.

In last night’s episode of the soap (Monday February 17 2020) residents of Albert Square gathered on a boat on the River Thames to celebrate The Queen Vic winning London’s Best Pub.

Those on the boat included Mo Harris and The Vic barmaid Tracey.

As the pair danced and had a good time, Tracey made a confession to Mo.

Mo turned to Tracey and said: “You and Phil Mitchell?” Clearly shocked by the revelation.

Tracey then confirmed saying: “It was years ago, just one night. Saying that, a night would be a generous description,” and the pair began laughing.

Viewers were left in stitches by what they had learnt.

Tracey and Phil was the funniest thing I heard about 🤣 #EastEnders

However, Tracey and Phil’s night together has been hinted at previously.

In a past clip, Jack Branning makes a joke that he reckons “Tracey is a bit of a goer” and Phil responds saying: “I can vouch for that.”

As if Phil mentioned about him and Tracey before 😂 completely overlooked this scene. #EastEnders #EastEnders35 pic.twitter.com/1aHwn6zMHf

FYI, Phil revealed years ago that he and Tracey had had a thing. #EastEnders

Did you know about Tracey and Phil?

Recently Tracey actress, Jane Slaughter, revealed some of her alter ego’s highlights as she celebrates 35 years on the soap.

Tracey appeared in the very first episode of the BBC Soap on February 19th 1985.

Last night’s episode was just the beginning of the anniversary as it was reported last month that a ‘major’ character would die.

Tracey and Phil was the funniest thing I heard about!

Linda Carter had gone looking for more booze and when the boat crashed, it caused her foot to become trapped.

Her husband Mick came looking for her and managed to find her.

As the water began to rise, Linda worried she wouldn’t get free but Mick refused to leave her.