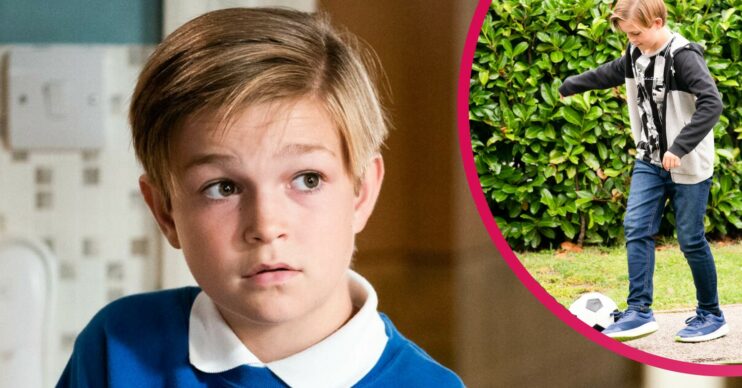 Tommy Moon in EastEnders: Who is his real dad? How did he get injured?

He's got a complicated family life!

Tommy Moon in EastEnders is Kat Slater‘s son. He’s big brother to her twins Bert and Ernie and little brother to Zoe and her secret – murderous – twin Dermott (who is also known as Luke).

And he’s also brother to Scarlett Moon, whose mum is Janine Butcher.

Who is Tommy’s dad?

When Kat returned to Walford in 2010 after five years away, she was pregnant. She told her family she had an affair while Alfie was in jail. When Alfie followed her back to Albert Square, the pair reconciled and Alfie agreed to raise the baby.

What Kat hadn’t mentioned, though, was that the baby’s dad was Alfie’s cousin Michael Moon. Awks!

Tommy and the EastEnders baby swap

Tommy was born on December 30, 2010 at the Queen Vic. But Kat was taken into hospital and left her newborn tot in the care of her dad, Charlie.

Meanwhile, across the Square, Ronnie Mitchell found her baby boy James had died in his cot. Distraught, she wandered out into the night and when she heard Tommy crying, she swapped him for her little boy.

Kat and Alfie were grief-stricken to discover the baby they thought was theirs had died. Ronnie kept up her deceit for several months before admitting that ‘James’ was really Tommy.

Eventually Tommy was returned to his parents.

Tommy’s real dad, Michael Moon, was not a nice man! Though he was handsome and charming, he had a dark side. He wasn’t interested in being a dad to Tommy and instead focused his energies on causing trouble for the residents of the Square and seducing Janine Butcher.

Michael and Janine seemed to be a match made in heaven and for a while they were perfect together. They were pleased when Janine found out she was pregnant and tied the knot just hours before baby Scarlett was born prematurely.

But in true Janine fashion, she and Michael eventually became enemies and it was Janine herself who stabbed Michael to death, though she managed to frame Alice Branning for the crime. In fact, Janine was eventually arrested for murder but got found not guilty.

Tommy grew up thinking Alfie was his dad and Alfie considers Tommy his son.

However Tommy recently found out the truth about Michael and it’s been a bumpy road for him and Kat ever since.

Football-mad Tommy was spotted playing in the Square by the actual Harry Redknapp when he visited Albert Square.

Harry said he thought Tommy was super-talented and it seems he was right because Tommy was snapped up by a local team.

But his career was brought to a screeching halt when he was involved in a dramatic fire at Phil Mitchell’s house.

Janine was desperate to speak to Scarlett, who was hiding out in Tommy’s room. She, Tommy and Scarlett all ended up locked in the bedroom while a fire – accidentally started by Janine – took hold downstairs.

Janine managed to open the window but when Tommy was making his escape, an explosion rocked the house and the young lad fell.

Now the talented youngster has been told not to play football while his injured leg heals. But that’s not easy for the active lad and poor Kat’s tearing her hair out, trying to stop him getting more hurt.

Is Tommy going to be the next football superstar or has his career ended before it even got started?