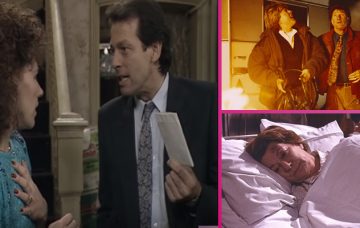 The most watched soap episodes ever

There are some truly iconic moments here!

Every day, soap lovers across the UK position themselves in front of their televisions, tablets, and laptops, ready for their dose of drama direct from their favourite fictional families. No matter how busy their day is, faithful fans are sure to make time to indulge in the latest instalment of their soap of choice.

TV bosses have been concocting memorable soap storylines for almost 60 years now, and the shocking storylines and plot twists based in the world of Coronation Street, EastEnders, Emmerdale and the like still successfully entice millions of loyal viewers in Britain and beyond.

Here, we’re counting down the most-watched soap episodes of all time while taking a look at the storylines that gripped a nation…

The producers’ controversial decision to air a live episode of the show paid off, with 16 million people switching on to watch events unfold on February 19, 2010. During the episode, Stacey Branning confessed to the murder of Archie Mitchell, a long-drawn out conclusion to a murder mystery storyline which Enders fans had been hooked on for weeks.

The now infamous Emmerdale plane crash that took place on December 30, 1993 saw the soap draw in its highest viewings to date. A whopping 18 million people tuned in to witness the biggest disaster to ever hit the sleepy village. The Eastern European airliner bound for Canada crashed into Emmerdale, killing off several show favourites while causing great destruction to the village. This of course included local landmark, The Woolpack.

BBC bosses were undoubtedly thrilled with the viewing figures for the month of April 2001, as the ‘Who Shot Phil’ storyline caught the attention of 20 million spectators at its climax. The plot was dragged out for five long weeks, with Enders fans everywhere making their predictions on the biggest whodunnit of the decade. That was, of course, until the writers decided to reveal Phil Mitchell’s former girlfriend, Lisa Shaw, as the culprit.

More than 21 million viewers tuned in to see Bet Lynch finally achieve her dream of becoming the landlady of the Rovers Return Inn on January 2, 1985. Having suffered at the hands of bossy pub manager Gordon Lewis, the sassy new landlady manager took pleasure in smugly informing him upon her promotion: “I’m in charge now. Get it? Got it? Good.”

Bianca Jackson and Ricky Butcher’s 1997 wedding turned out to be one of the most eagerly awaited ceremonies to ever take place on Albert Square. More than 22 million devoted Enders fans tuned in to witness the joining together of the two lovebirds in holy matrimony. The couple’s famously fiery relationship experienced its fair share of ups and downs, but the pair remarried once again in 2009, much to the delight of soap fans everywhere.

After initially being scared off by talk of marriage, Ken eventually came round to the idea, making an honest woman of Deidre on July 27, 1981. Deidre left her trademark spectacles at home as she walked the aisle with Ken, 16 years her senior. More than 24 million people tuned into ITV to watch the Coronation Street wedding of the year!

Hilda Ogden has gone down in Coronation Street history as the original gossip girl, known for her sharp tongue and trademark appearance (headscarf and curlers!). Hilda resided on Coronation Street for 23 years, so it was no surprise that her final scenes on Christmas Day 1987 were viewed by a whopping 26.6 million fans.

As is tradition on Albert Square, Christmas Day at the Old Vic was rather dramatic in 1986. Dirty Den Watts used the festivities as an opportunity to inform his wife, Angie, of his intentions to file for divorce. Around 30 million viewers tuned into BBC One on December 25, 1986 to watch Den serve a gobsmacked Ange with divorce papers. The landlady’s disbelieving face as Den hands her the papers, declaring with a sinister smirk: “Happy Christmas Ange.” This moment the most highly viewed episode of any British soap to date. It also remains the most shocking break up in soap history.

Which have been your most iconic moments in soap? Leave us a comment on our Facebook page @EntertainmentDailyFix and let us know!