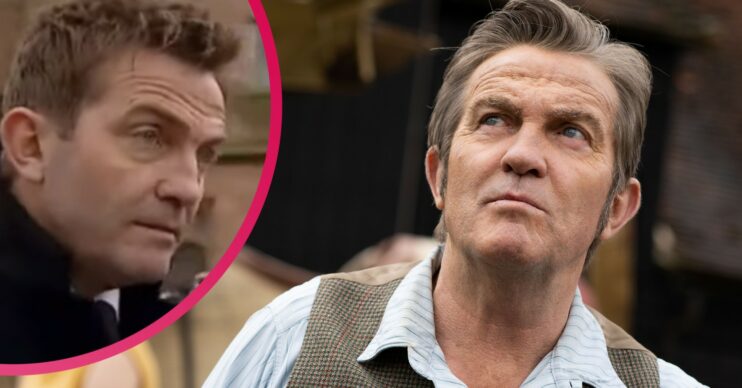 The Larkins star Bradley Walsh in Coronation Street: Who did he play? Could he ever return?

He's still got links to Weatherfield

The Larkins star Bradley Walsh is known for his role in the popular ITV comedy drama, as well as hosting television quiz The Chase.

But he also starred in Coronation Street back in the mid 2000s, as Danny Baldwin.

Who was Danny Baldwin?

Danny Baldwin was the nephew of Corrie legend Mike Baldwin. Or so he thought when he arrived in Weatherfield.

Later, he discovered he was actually Mike’s son, making him the half brother of Mike’s other sons, Mark Redman and Adam Barlow.

Danny arrived with second wife Frankie, and sons Jamie and Warren and  came to Manchester to work in Underworld, alongside his uncle Mike Baldwin.

But the family had lots of secrets – like any good soap clan! Danny had an affair with Jamie’s girlfriend Leanne Battersby.

Then Frankie was revealed to be having an affair with Jamie, who was her stepson.

After Mike’s death the brothers fought for control of the factory. Adam sold his shares to Paul Connor, and Danny did the same.

So the Baldwins’ reign at Underworld came to an end, and the new rulers – the Connors – took over!

When did Danny leave Coronation Street?

After selling his share of the factory, Danny said goodbye to rainy old Manchester and instead headed to Spain.

He was last seen at a glitzy New Year party with a beautiful woman on his arm!

Since 2006, the factory has been in the hands of the Connor family, and now Sarah Barlow too.

And with Sarah being married to Adam, is it possible there could be a return on the cards for the Baldwin family?

Read more: Who plays Adam Barlow in Coronation Street? Does Samuel Robertson have a famous girlfriend?

Adam’s definitely more Barlow than Baldwin these days, but the return of his half brother could see him swing back towards dad Mike’s family.

We’d love to see Danny back, and his sons Jamie and Warren – who was a Weatherfield County player like James Bailey before him. Perhaps he could return as a manager?

And scheming Mark Redman – who was a definite chip off the Baldwin block – would be a great villainous addition to the Street.

The Larkins star Bradley Walsh hasn’t been short of work since he waved goodbye to Weatherfield!

After Coronation Street he joined the cast of Law and Order UK, as DS Ronnie Brooks.

He spent many years presenting game shows for ITV including Wheel of Fortune and the smash hit The Chase.

And in 2018 he joined Doctor Who, playing Graham O’Brien, alongside Jodie Whittaker.

Now Bradley’s on our screens as Pop Larkin in the new comedy drama The Larkins.

Would you like to see Danny Baldwin return to Coronation Street?