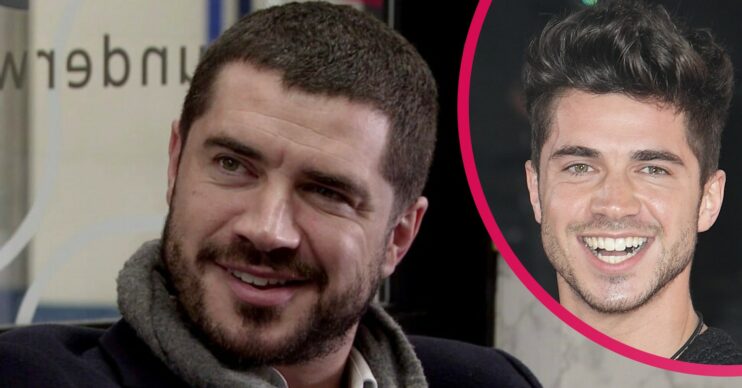 Who plays Adam Barlow in Coronation Street? Does Samuel Robertson have a famous girlfriend?

He's related to some of Weatherfield's most famous families!

Adam Barlow in Coronation Street is part of Weatherfield history and has been since before he was even born.

After marrying Sarah Platt, he’s now connected to three of the soap’s most iconic families.

But what do we know about Adam? And actor Samuel Robertson who plays him?

Is Sam as much of a ladies’ man as his alter ego used to be? Here’s everything we know about them both…

He’s the nephew of Peter Barlow, Daniel Osbourne, and Tracy Barlow, which makes him cousin to their kids Simon and Amy Barlow and Bertie Osbourne.

Read more: 5 soap characters that need a huge storyline or face the axe!

Of course, on his dad’s side he has two half-brothers, Danny Baldwin and Mark Redman.

Adam’s married into another iconic Street family – the Platts. His wife is Sarah Platt – now Sarah Barlow – and he’s stepdad to her son, Harry, and daughter, Bethany.

Back in the 1980s, Ken’s daughter Susan – who was Peter Barlow’s twin sister – married her dad’s nemesis Mike Baldwin, much to her dad’s horror.

Their marriage broke down and when she found out she was pregnant she told Mike she’d had an abortion, before she headed north to live with her grandparents in Glasgow.

Susan was killed in a car accident in 2001. There was a bit of a custody battle, which Mike won, and Adam went back to boarding school in Glasgow.

When did Adam arrive in Weatherfield?

Back in 2005, Adam left school and joined Underworld, working with his dad Mike. When Mike died, Adam became one of the factory’s managers.

Half-brother Danny tried to diddle Adam out of his inheritance but proving he was a true Baldwin, Adam put up a fight and managed to secure his share of the factory. Working with Danny was tricky though, so he sold up to the Connors and headed to Portsmouth to run Peter’s betting shop.

In 2016, Adam – who’d qualified as a solicitor – moved to Weatherfield once more to help care for Ken after he had a stroke.

He set up his law firm with Todd Grimshaw initially and then with Imran Habib.

Who has Adam dated on Coronation Street?

When Adam first returned to Coronation Street, he had a brief romance with Maria Connor, then started a relationship with Rosie Webster.

Rosie even gave Adam a false alibi when he was accused of pushing Ken down the stairs – though the real culprit was Daniel Osbourne.

Later, Adam discovered that Maria was having an affair with Aidan Connor, despite being engaged to Eva Price. He took a photograph of Maria and Aidan kissing and used it to blackmail Aidan.

But that wasn’t the half of it. Eva revealed she knew all about the affair and she was out for revenge! She had a plan to dupe Aidan into marrying her by pretending she was pregnant and then to clear the factory’s bank accounts. Adam agreed to go along with her plan and somewhere along the way, he developed feelings for Eva.

In true Corrie style, though, the plan backfired. Eva changed her mind about stealing the cash, while Maria revealed the truth about her fake pregnancy at the wedding.

Adam, though, went through with the plan!

Heartbreak and finding happiness with Sarah

But his heart was broken later when Eva left Weatherfield after Aidan’s death. Adam was planning to go with her – and baby Susie – but changed his mind when he realised she’d never love him the way she loved Aidan.

Since then, Adam’s fallen for Sarah Platt and the pair have tied the knot. Their romance was extra cute because when Adam returned to Weatherfield and worked at the factory, he had a stonking great crush on Sarah! He played the long game and he won!

When Adam was first seen in the show as a child, he was played by Iain De Caestecker.

Iain played the role for two years before he left in 2003.

He’s since gone on to have a successful career in film and television, starring in shows such as Agents of S.H.I.E.L.D, Us and Roadkill, and in films including Overlord and Lost River.

When Adam returned to Coronation Street in 2005, the role was played by Samuel Robertson, who still plays Adam today.

Samuel has also appeared in Beaver Falls and River City, and he took part in Celebrity Big Brother back in 2013.

How old is Samuel Robertson?

Back in September 2020 The Sun reported that former footballer-turned-presenter Alex and Sam had enjoyed a “cosy candlelit meal” together in central London.

A source told the newspaper: “They both looked totally relaxed about being out together, even though they’re both very famous now.”

“Strictly made Alex a household name so she’s instantly recognisable, and Sam is a big name on Corrie.

“So they probably knew they’d be spotted out together but didn’t seem to mind at all.”

However, following the date Alex admitted to Fabulous magazine: “I never seem to have a lot of luck on dates. My one date in ages was going out with Sam, who is lovely.

“The next morning, our pictures were all over the press because someone in the restaurant had taken a photo.

“It wasn’t exactly a great start!”

Alex revealed on The One Show earlier this month (February 2022), during a conversation about a dating show, that she was currently single.

This seemingly confirms things did not work out between the pair.

Earlier this week Sam told ED! and other press he wasn’t happy with his character’s latest storyline.

Adam is being set up by ex Lydia Chambers who is convincing Sarah that she’s having an affair with Adam.

But given Adam’s womanising history – and his fling with aunt-in-law Carla only a year or so ago, Sam’s worried it’s all too much of the same thing.

“I feel like I’m doing the same scene that I did 12 months ago. Then you think, is it me? Is it the character? Is it the other actors?”

He continued: “It’s interesting, I speak to a lot of the guys here who have been working here for 15/20 years, like David Neilson (Roy) and Jimmi Harkishin (Dev). I’m like ‘do you ever have these moments where you think ‘I can do with maybe hanging this character’s suit on the coat hanger for a little bit’ and they’re like ‘yeah it happens.'”

“I feel like at the minute, coming through this really big storyline I definitely feel like I need to recalibrate a bit and find out what this character’s all about.”

Sam added: “I’ll be honest with you, I think this storyline, the confusion Adam is feeling, I’m kind of feeling that same confusion myself as an actor in terms of ‘where is this character? Who is this character I’m playing now?’ It’s very different from what I thought it was six to 12 months ago.

“So whether it’s a moment in time and things will start to fall back into place and be much more relaxed, that might well be the case.”

Read more: Who is leaving Coronation Street this year?

What’s next for Adam Barlow in Coronation Street?

Lydia is set to up her game next week and report Adam to the police for trashing her flat and harassing her.

She has the upper hand right now having cloned his cards and faked instances of them being together.

Sarah well and truly believes her husband and best friend have been having an affair. But how far will Lydia go to wreck Adam’s life?

And exactly why does she want to?

Some fans have speculated Adam is the father of her son.

Coronation Street spoilers for March have revealed Adam’s life is in danger as Lydia’s vendetta continues. Will she kill him?