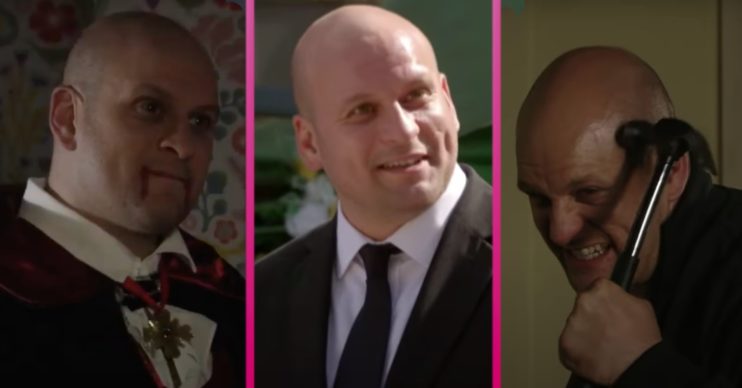 Who did Stuart Highway kill in EastEnders and will he and Rainie have a baby?

Stuart Highway in EastEnders is a former childhood friend of Mick Carter, one-time tormentor of Mick’s sister, Tina Carter, and ex-hunter of paedophiles.

His brother is Callum Highway, which makes him related to the Mitchell family by marriage. And his grandmother, Vi, has recently arrived in Albert Square.

Stuart also has a daughter called Zara, who doesn’t want to spend time with her dad.

Stuart’s married to Rainie, and the pair care for Rainie’s great-niece Abi Branning. They run the funeral parlour together.

Who plays Stuart Highway in EastEnders?

Stuart is played by actor Ricky Champ. Before joining EastEnders as Stuart, Ricky had appeared on television in shows including Family Affairs, Casualty and the comedy series Him & Her.

He’d also had a part in Game of Thrones, and had actually appeared in EastEnders a few years earlier playing a photographer.

Ricky is married to  Samantha Gilbert and they have a daughter called Beatrix.

He’s a keen golfer and also showed off his moves when he appeared on a Children in Need special edition of Strictly Come Dancing.

When Stuart came to Albert Square, he seemed to be a nasty piece of work. His ‘pranks’ such as donning a mask and grabbing Mick to make him think he was being attacked, or paying Hayley Slater to get into bed with a drunk Mick, backfired and no one was very pleased to see him.

Stuart and Mick had history – Stuart had taken the blame for Mick when they were kids and ended up in a young offenders’ institution. So he thought Mick owed him.

Mick found messages to underage girls on Stuart’s phone and reported him to the police. But Stuart revealed he was tracking down paedophiles and roped Mick in to help.

And he was furious when Mick backed out of one confrontation, because their target wasn’t a paedophile. Stuart vowed revenge.

Stuart Highway and the Carter family in EastEnders

Stuart taunted Tina Carter when he arrived, and she suddenly remembered that he’d done the same back in the 90s. He’d locked her in the boot of a car and she thought she was going to die.

When Mick found out, he told Stuart he didn’t want to see him again and Tina attacked Stuart. But Mr Highway wanted revenge.

When Stuart was shot, he blamed Mick. He was so convincing that poor Mick went to prison. Linda, though, pretended to believe Stuart and broke off her marriage. But really she was plotting to get Stuart to reveal the truth – he had shot himself.

Stuart’s daughter, Zara, who’d initially supported her father, was not impressed with his lies and cut contact with Stuart.

Mick was released from jail, and Stuart was arrested. And Mick even got revenge on his former mate by bundling him into the boot of a car – just as Stuart had done to Tina.

Since then, Stuart’s had something of a transformation. When he went to an AA meeting he met fellow addict Rainie Cross – and the pair fell in love.

Their romance has been full of drama and comedy and from Stuart’s early days on the show as a nasty villain, he’s been transformed into one of EastEnders’ most loved characters.

Rainie and Stuart tied the knot, with Stuart locked inside a hearse and their marriage has carried on in the same way! Mixing comedy with some real heartfelt moments.

They’re now devoted parents to little Abi. And they’re desperate for their own baby, too. Stuart and Rainie are looking for a surrogate mother to give them the baby they long for, and Bernie Taylor has offered to do the job.

But if we’re right, this journey isn’t going to be straightforward for Mr and Mrs Highway!

Want more news from EastEnders? Entertainment Daily has a dedicated EastEnders spoilers section for you to get your fix before the latest episodes air.

Are you a fan of Stuart in EastEnders? Head to our Facebook page @EntertainmentDailyFix and tell us what you think about his current storylines.