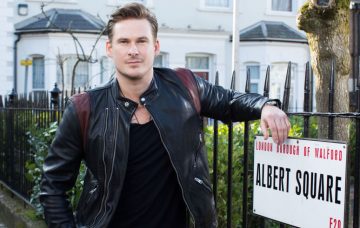 Could Woody Woodward be heading back to the Square?

Lee Ryan has spoken out about the possibility of heading back to Walford following his stint on Strictly Come Dancing.

Lee’s character Harry ‘Woody’ Woodward was last seen heading out of Albert Square in June after being unveiled as the culprit of the E20 robbery.

Read more: Strictly star says ‘bring on the curse’ after being matched with pro partner

And sorry Woody fans but his return isn’t looking too promising.

Lee revealed at the launch of this year’s dancing extravaganza that Woody heading back to EastEnders isn’t really on the cards.

He said: “When I left, they said to me they’re going to keep it open for me to come back. So who knows? But I’m doing other stuff now. I’ve got a film I’m working on.”

Lee continued: “There’s so much opportunity that came off the back of EastEnders. And to be honest with you, I think that’s the reason I got this.

“So it let on quite naturally. I’m a rare hybrid now of being an actor and a pop star. There’s only a few of us.”

Lee also gushed about how lucky he is to be involved in two of the biggest shows in the country.

He arrived in April 2017 on a motorbike as he prepared to take over running the Queen Vic pub in Mick and Linda’s absence.

It wasn’t long before he found himself a love interest in the form of Whitney Dean.

But he broke her heart when he left to run a bar in Spain, leaving her just a note at the tube station to tell her of his plans.

Luckily for Whit it wasn’t long before she met Halfway and the rest – as they say – is history.

Would you like to see Woody make a return to EastEnders? Leave us a comment on our Facebook page @EntertainmentDailyFix and let us know what you think!