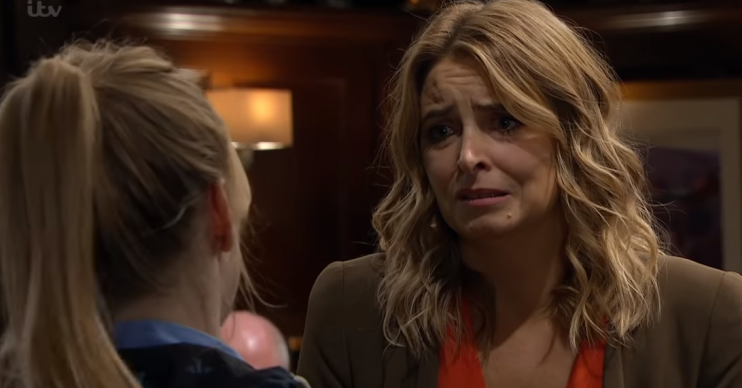 Emmerdale SPOILERS: Vanessa and Charity to split over Graham’s money?

But they will get married eventually

Michelle Hardwick is confident Emmerdale‘s Vanity will marry “at some point”, after their wedding was called off last month.

But the characters, Vanessa Woodfield – played by Michelle – and Charity Dingle (Emma Atkins), will have to fight back because they are on the verge of splitting up over Charity stealing Graham’s money on the night he was murdered.

The women were all set to tie the knot on the day of Graham Foster’s (Andrew Scarborough) murder only for Charity to be a no-show.

However 43-year-old Michelle believes the couple will still get to walk down the aisle one day.

She told Digital Spy: “I don’t think there’s another wedding for the moment. There’s far too much going on.

“I’m sure there will be one in the future at some point, but maybe not right now.”

For now, things are hectic for Vanessa and Charity after the latter and her son Ryan Stocks (James Moore) stole Graham’s money.

There is another twist in the tale as Vanessa’s good friend Rhona Goskirk (Zoe Henry) is grieving for Graham, so Vanessa is torn about whether to divulge the truth about the late character’s cash to Rhona or the police.

I don’t think there’s another wedding for the moment.

After giving Charity an ultimatum over coming clean, insisting either Charity confesses or Vanessa will do it for her, Vanessa goes to talk to Rhona herself.

Michelle added: “Vanessa is talking to Rhona and the situation just overcomes her.

“She’s just about to do the right thing, but all of a sudden, Charity comes storming in and interrupts.

“Charity knows exactly what Vanessa was going to say.

“Vanessa is a bit snippy with Charity then, asking why she can’t just talk to her friend for two minutes without her butting in! She starts losing her rag a little bit with Charity.”

With Charity desperate to appease Vanessa, and Vanessa adamant Charity must tell the police the truth about the money, are they going to find a solution?

Or could another split for the time being be on the cards for these two?

Later in the week, Vanessa is left terrified when she comes face to face with Pierce, who kidnaps her son Johnny.

As Vanessa takes off in hot pursuit, will Charity come to her rescue?

Or have they given up on each other for real this time?