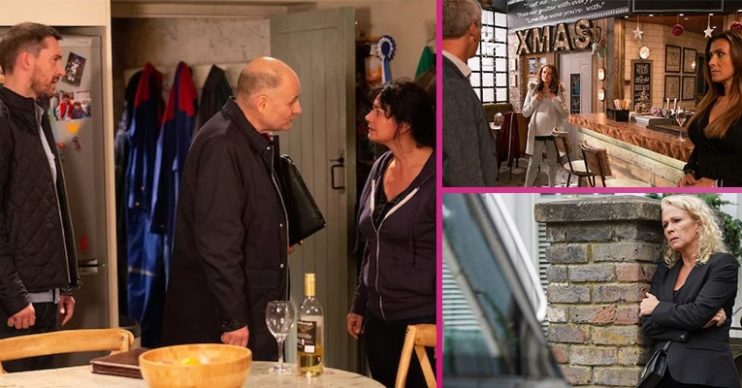 The soap schedule on Monday December 2 is – for once – as normal as Emmerdale airs at 7pm, Coronation Street has double bill at 7.30pm and 8.30pm and EastEnders airs in the 8pm slot.

Moira’s drunken behaviour is cause for concern in Emmerdale.

Meanwhile, Michelle’s plan is taking to fruition on Coronation Street.

Here are the 10 biggest spoilers from tonight’s soaps.

1. Moira gets drunk and inappropriate

Moira messes up a business meeting by being drunk and inappropriate.

Pete tries to help her, but she shuts him down.

Cain has no sympathy and insists she can’t see the kids until she can prove she’s a fit mother, leaving Moira determined to change.

2. Pete gets a tempting offer

When Nate makes Pete an offer to come and work in partnership with him on Wylie’s farm, he’s seriously tempted.

Is Pete about to break Moira’s heart and betray her too?

Graham heads to Home Farm to collect his things.

As he packs up ready to leave the village, he later tells Rhona he’s had second thoughts and wants to stay.

How will Kim react?

1. Vicky starts her revenge on Robert

Vicky interrupts the Connors’ pre-wedding celebrations in the Bistro.

Robert quickly gets rid of her and Michelle explains he’s just helping Tyler out.

A vengeful Vicky threatens she’s going to take Robert for every penny he’s got, so Michelle suggests they put her name on the deeds to the Bistro instead…

2. Robert signs his life away

Robert agrees to sign the Bistro over to Michelle, but Carla soon finds him having second thoughts.

He eventually signs the papers before heading over to see Vicky and warn her to stay away from the wedding.

They argue and one of Vicky’s neighbours hears an almighty crash and then silence.

Robert later returns home and tells Michelle Vicky definitely won’t be at the wedding – but how can he be so confident?

Evelyn quizzes Jade on her new job, but she remains tightlippped.

As she prepares to leave No.9 and says goodbye to Fiz, she shows a complete lack of emotion.

Will her behaviour raise suspicions at last?

4. Daniel wants his memories back

Adam later takes care of Bertie so Daniel can have some alone time, and he fights back the tears as he watches the videos.

It’s the day of Mel’s funeral and Lisa braces herself to say goodbye.

As everyone remembers Mel at the wake, Lisa’s mood darkens when Phil and Sharon arrive.

Everyone praising Sharon is the final straw for Lisa, who makes a speech and drops the bombshell Sharon isn’t carrying Phil’s baby.

But in her emotional state, will anyone believe her?

Chantelle calms Gray’s nerves ahead of their therapy session, and she’s stunned when he finally admits the truth.

As Gray opens up about his past, Chantelle is left speechless.

Will this be a new corner for them to turn?

Mick suggests they do a Christmas detox to try and take control of Linda’s drinking.

Linda agrees, but it’s clear she hates the idea.