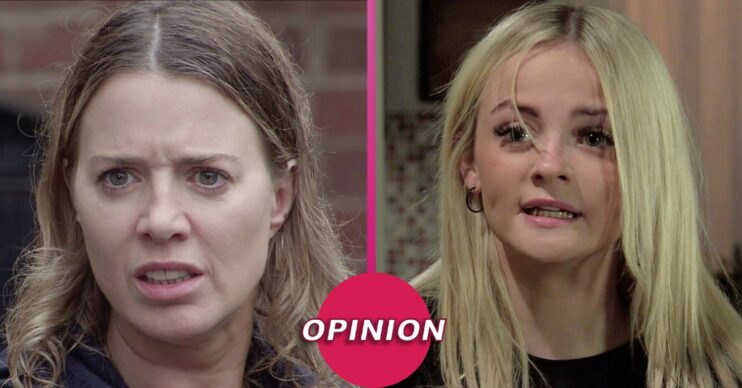 Abi has been tormenting Kelly

Coronation Street character Abi has been struggling since her son Seb was murdered.

Although Kelly was there the night of Seb and Nina’s attack and started the violence by slapping Nina, as things escalated she tried to stop Corey Brent from hurting Seb.

But with Kelly living back on the street, Abi is not happy and is tormenting the teen.

I would like to start by saying I in no way agree with what Kelly did to Seb and Nina.

Kelly should never have slapped Nina and, after Corey attacked Seb, she should’ve called an ambulance.

However I would like to point out she did try to stop Corey.

I understand Abi is grieving and the pain of losing a child is unbearable, however tormenting Kelly won’t help.

Troubled Kelly now lives with Dev and is trying to get her life back on track after being in prison and sleeping on the streets.

It’s clear she will never forgive herself for what happened to Seb, but it’s better that she tries to make things right and make something of her life.

She got herself a job and has tried to turn things around.

Abi began tormenting Kelly after returning from her honeymoon by staring at her in the Bistro and even blocking her way to work.

I know Abi is struggling seeing Kelly every day, but bullying her will not make her pain go away.

Kelly is only 16; a grown woman bullying a child is completely wrong.

And it’s worth mentioning Kelly has tried to take her own life before. Her mental health is fragile and it’s not right for Abi to make things worse.

‘Abi needs to get help’

Tonight (Monday, December 27) Abi turned violent and smacked Imran after they got into a verbal altercation.

Although I love Abi, Imran was right. Abi herself has made many mistakes and the reason so many of we viewers love her is because we’ve seen her imperfect character develop.

She went from a drug addict who couldn’t look after her kids and didn’t seem to care, to a wonderful mother, stepmother, wife and good friend.

Of course Abi still has her same attitude and wild side, but we wouldn’t want her any other way.

I really think Abi needs to take into account the second chances she has been given with Kelly.

Kelly and Abi really aren’t that different, they’re both good people who have made terrible mistakes.

Abi does need help with dealing with the loss of Seb as it’s clear she’s still struggling and there is no shame in that.

‘Give Sally Carman all the awards’

As always, I like to end my opinion pieces by praising the cast as they do a phenomenal job of bringing these stories to life.

Sally Carman is an incredible actress and Abi is definitely one of my favourite characters on the show. I hope to see her bring home more awards because she truly deserves recognition for this plot.

I also want to add that Millie Gibson is also doing a wonderful job. She’s been a great addition to Coronation Street and I look forward to seeing what’s in store for Kelly in the future.