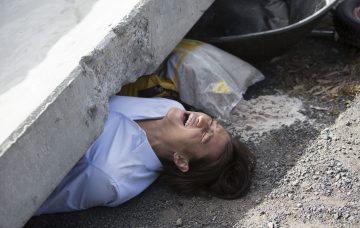 Is this the end for Paul's son?

Rafael Humphries steps up his revenge plan once again next week – but when Leo Tanaka is left fighting for his life as a result, it seems the mysterious Brit might have gone too far…

Blaming Paul Robinson for the death of his mother in a factory fire back in Brazil, Rafael has been on a revengeful rampage against the Ramsay Street businessman ever since he arrived in Australia.

But Rafael’s mind might have been slightly distracted from his plotting against Paul recently, thanks to a budding romance with David Tanaka – none other than Paul’s son!

Read more: Coronation Street SPOILER: Adam Barlow is back in Weatherfield, but will he reunite with Eva?

But next week sees Rafael team up with Sue Parker – a fellow Paul Robinson hater – and the pair put a  plan against Paul into motion that almost kills a unsuspecting Leo.

After discovering that Sue’s son Jayden was responsible for most of the safety breaches on the building site at Robinson Heights and not Paul, Rafael has a change of heart and rushes to stop Sue from putting the wheels of their revenge plan into motion.

But he’s too late – and before he can do anything, a concrete slab comes crashing down, trapping Leo underneath.

He’s eventually rescued and rushed to hospital – where his doctor brother, David, happens to work.

Raf feels awful and heads to the hospital to check Leo is okay – bumping into David when he gets there.

Unassuming David thinks Rafael is there to support him in the wake of his brother’s accident – little does he know that his new boyfriend is the one who almost killed Leo.

Secrets don’t stay hidden for long in Ramsay Street – so does this mean Rafael and David are over before they’ve really begun?