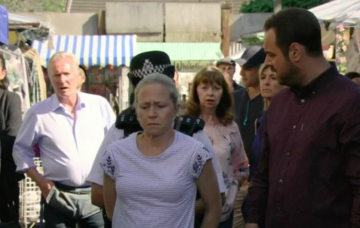 The Carters were rocked as Linda was lead away by police

Stuart was shot in the pub during Monday night’s episode and – at the moment – no one has a clue who pulled the trigger.

Linda is one of the suspects and has been acting particularly shady,throwing the gun in the canal and lurking around listening in while the police grilled her husband Mick over the incident.

There are many theories about what happened, including some fans thinking Stuart actually pulled the trigger on himself to frame one of the Carters.

Poor Linda was read her rights right in the middle of the Square as the locals looked on in amazement.

Meanwhile fans turned on Keanu Taylor, blaming him for her arrest after he witnessed her ditching the gun.

The mechanic revealed to his older lover Sharon Mitchell that he was considering going to the police about what he witnessed.

He told her: “What the hell was she doing throwing something into the canal in the middle of the night? What if it was the gun? What if she killed someone and I did nothing?”

Sharon told him that you don’t rat on your friends before Keanu pointed out that Linda isn’t his friend.

Did he ignore her and go to the police with what he saw? He won’t be very popular with fans if that is the case. 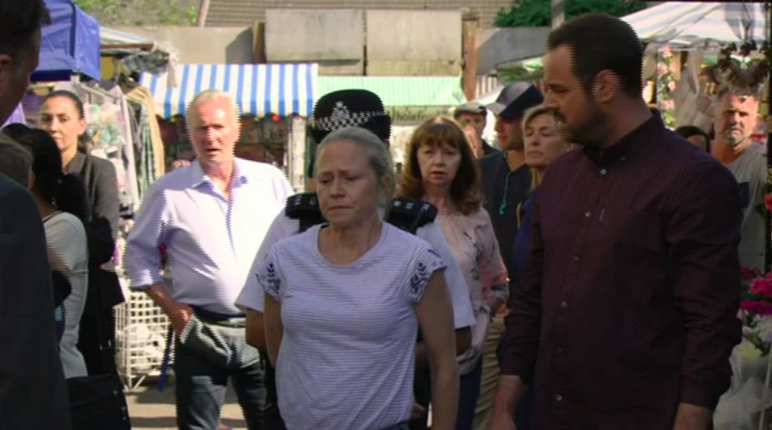 “Will be fuming if Keanu set Linda up causing her arrest,” raged one viewer.

Another added: “Keanu called the cops on Linda. Sharon won’t like that.”

And a third commented: “If Keanu dobbed Linda in then he can do one!”

Did Keanu call the police & grass on Linda @ the canel ! more than possibly yes. #EastEnders

Why is everyone blaming Keanu 😂 Linda ditched the gun and made a call from the same area, her phone was gonna be traced sooner or later anyway 😂 #EastEnders

So Keanu snaked it to the police and wet his pants like an old woman acting like he’s under investigation because he thought Linda shot Stuart without seeing what was in her hands! What a wimp! Poor carters #EastEnders

Keanu called the cops on Linda. Sharon won’t like that. It wasn’t her though. That’s for sure. She possibly knows something but she didn’t shoot Stuart. #EastEnders

If Keanu dobbed Linda in then he can do one. After him taking part in the robbery?! #eastenders

Stuart remains in a critical condition in hospital after almost bleeding to death in the Vic cellar.

Will he come round and do the decent thing and reveal who really shot him? Or will he punish Mick by letting Linda take the blame?

Who do you think shot Stuart? Leave us a comment on our Facebook page @EntertainmentDailyFix and let us know what you think!