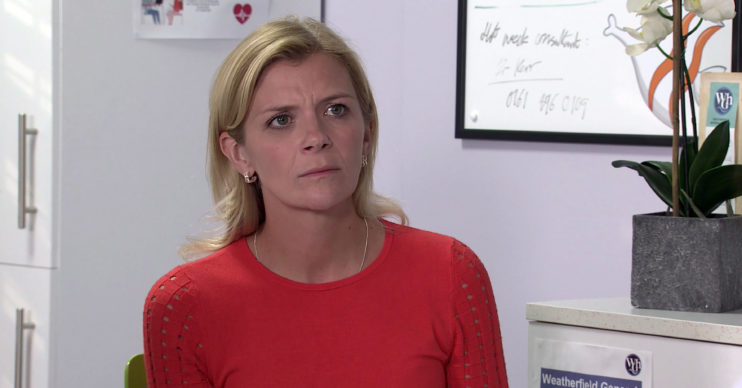 Coronation Street SPOILERS: Leanne makes a plan to take poorly Oliver out of the country

It's make or break time for little Oliver

The frantic mum is going through every parent’s worse nightmare and faces the decision in next week’s episodes.

Why does Leanne Battersby want to take Oliver to Germany?

Leanne, partner Nick Tilsley and Oliver’s dad Steve McDonald have been trying to hold things together.

Tragically, Oliver had a seizure, was rushed to hospital and placed in intensive care on life support.

As a result, things are about to get even worse for him.

What happens with Leanne and Oliver next week?

Next week’s episodes see a distraught Leanne, Nick and Steve seek a second opinion as Oliver’s meds are increased.

As hope increases, they soon receive the worst possible news.

The docs tells them that Oliver will never be able to breathe unaided and the time has come to talk about switching off his life support.

However, Leanne is determined to save her son’s life and contacts a doctor in Germany.

When the doc says he can help her, she makes the decision to go to Germany.

Leanne vows to save her son’s life and take him abroad.

What else happens next week?

Elsewhere, Mary and Billy call at the police station to find out if the body was definitely Kel’s.

When Billy reveals that police found a body in the canal and he suspects it might be that of Kel, Paul’s distraught and heads out, leaving Billy worried.