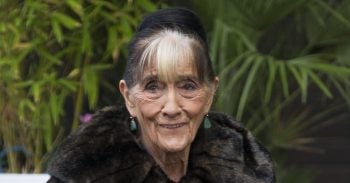 EastEnders star June Brown refuses to give up smoking or drinking

The 92-year-old says she will die fairly soon anway

Actress June Brown thinks she will die “fairly soon” – so she will not give up drinking Guinness or puffing on cigarettes.

The 92-year-old EastEnders star – who has played soap legend Dot Cotton since the show’s debut in 1985 – doesn’t see the point of counting the number of cigs she has a day, and still insists on chowing down on dark chocolate, despite being allergic to the sweet treat.

She said: “I’m going to die of something fairly soon, so why not enjoy myself … [I] love red wine and also dark chocolate, even though I’m allergic to it and it makes me sneeze.

“And the Guinness helps me keep a bit of weight on. So I don’t need to be careful about what I eat or drink. What’s the point of counting how many cigarettes I smoke a day? I’ve been on them for over 70 years.”

Despite her seven-decade cigarette habit, June did attempt to move onto electronic cigs, but they were too “heavy”.

She said: “I did try one of those new electronic cigarettes, but it was so heavy it kept falling out of my mouth – so that went in the bin.”

June isn’t a massive fan of modern technology, but knows her way around a TV and regularly tunes into ITV’s Loose Women as well as News At Ten to catch up on her current affairs.

She added to Radio Times magazine: “I watch News At Ten and Loose Women and that gives me all I need to know.”

Earlier this month, June admitted she struggles to “go out socially” because of her “very poor” eyesight.

She said: “I’ve got very poor sight. I’ve got extra lenses inside my eyes to try and help me read better.

“They help with my ­peripheral vision, but I’ve got no central vision at all. I haven’t driven for years and I can’t really go out socially due to my eyesight.”