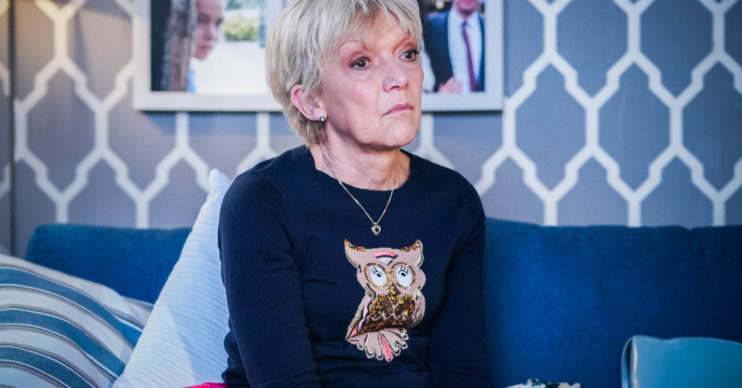 Does Jean Slater in EastEnders really have cancer again? Is she dying?

She's famous for her Sausage Surprise!

Jean first appeared in 2004, for just one episode, and then returned as a regular character a year later.

After a few years of being in and out of the show, she returned full-time in 2018. She’s a hugely popular character with Jean providing some of the Square’s most heart-wrenching drama and a lot of laughs, too.

Who plays Jean Slater in EastEnders?

Jean Slater in EastEnders is played by experienced actress Gillian Wright. Alongside her career in television – playing roles in Casualty, Holby City and Coronation Street – Gillian is a theatre actress.

She is also a visiting director and workshop leader, working with drama schools, universities and children with special needs.

Jean Slater has bipolar disorder. Her condition has made things difficult with her daughter Stacey – who has inherited the disorder – and son Sean.

Early in her time on EastEnders, Jean attempted suicide  and was sectioned. Stacey helped her mum through her troubles, and the pair built bridges, though Jean found it harder to make amends with Sean.

Jean also intervened when Stacey showed signs of having bipolar and helped her daughter.

Since then, Jean’s mental health has been the catalyst for many of Jean’s stories. She won some money on a lottery scratchcard, and was horribly manipulated and conned out of her winnings by Michael Moon.

Occasionally Jean is disbelieved, taken advantage of,  or made fun of, thanks to people knowing about her mental health issues. Actress Gillian Wright has researched the condition widely and she won Best Dramatic Performance at the British Soap Awards in 2019.

One of the thing Jean’s most famous for is her special Sausage Surprise which she loves to cook for her family and friends!

Widow Jean has had a number of romances in her time on the Square including with Ian Beale and Billy Mitchell.

She married former policeman Ollie Walters and they moved to Brighton together. But when she returned to Walford she revealed that Ollie had cheated on her and their marriage was over.

Jean’s most life-changing romance was with Daniel Cook. Who she met when she was having treatment for cancer.

Jean was diagnosed with ovarian cancer and struggled to cope initially. She even fled to a caravan in Wales for a while. But son Sean helped her come to terms with her diagnosis and accompanied her to her first hospital appointments.

At the hospital, Jean met Daniel who was making a nuisance of himself with the nurses.

Despite Daniel being ‘difficult’, he and Jean grew close. And she was devastated when she passed away. She and Kush Kazemi went to the memorial ceremony.

But then Jean discovered Daniel had faked his own death. He had worried he was growing too close to Jean and he didn’t want her to watch him suffer.

When it was revealed that Daniel had faked his death, Jean was initially furious. Daniel was sweet and so sorry, that she eventually forgave him and finding out he’d paid the Slaters’ rent helped too!

The pair admitted their feelings for one another, and Daniel promised he wouldn’t die until he knew Jean was cancer free.

As he got worse, Jean found out her cancer had gone. Jean told a fib and said she hadn’t got her results, but Mo let it slip.

Jean and Daniel sat together on Arthur’s bench in the Square. Jean went to get hot chocolates and when she returned, Daniel had passed away.

Late in 2020, Jean found a lump in her breast. She believes her cancer has returned – one of the reasons she was so devastated when Stacey went to jail – and doesn’t want any more treatment.

But is Jean right about her diagnosis? Is she dying?