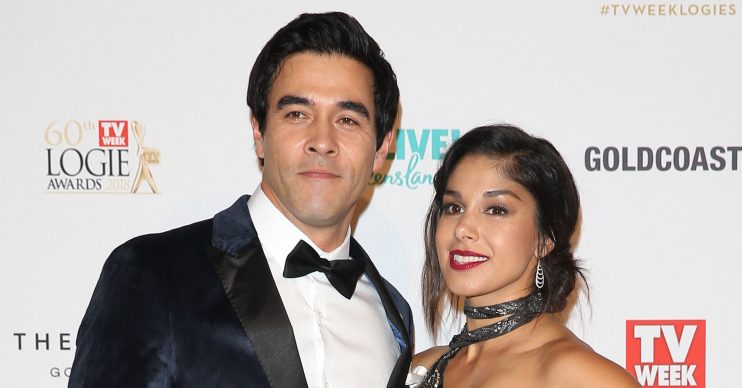 Real-life Home and Away couple James Stewart and Sarah Roberts have tied the knot at a stunning castle in Ireland.

In fact, they said ‘I do’ at Luttrellstown Castle, the very same place David and Victoria Beckham married 20 years ago.

James and Sarah married in July and have spoken to Who magazine about their magical big day.

A magical moment ✨ Home and Away’s James Stewart and Sarah Roberts invited WHO to their Irish fairytale wedding… #linkinbio for all the photos from their special day and an exclusive chat with the newlyweds.

James, who plays Justin Morgan on the soap, revealed they didn’t care where they got married, but loved the spot they eventually chose.

“We could have easily gotten married under a tree by some water or on a property up in the hills; anywhere! But this has been magic.”

If you look for it, I’ve got a sneaky feeling that love actually is all around. I get to keep him forever. ❤️ #fiance @__jamesstewart__

She went on to add the weather was a big plus on the big day.

“When we decided to get married in Ireland, [we knew] we’ve got two production breaks at work. Either July or December. December is going to be really cold in Ireland, so we thought July would be perfect and actually it was!

“It was 25 degrees the day we got married, which is really unusual for Ireland at this time. They were all running around saying it was a heatwave!”

James and Sarah met in 2017 on the set of the soap, and were engaged last year.

James revealed his other half had said yes with a gorgeous Instagram snap. And Sarah posted a smiliar excited message to her own account.

The couple told New Idea that the proposal was understated and romantic.

“I didn’t see it coming this soon,” Sarah admitted. “When the box came out I thought, ‘Maybe it’s a birthday bracelet’, but Jimmy was nervous, a bit sweaty, and his eyes were watery. I knew something was up.”