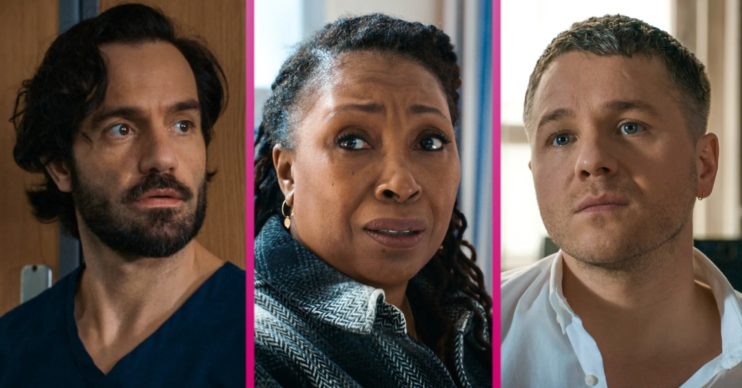 Max is left devastated when complications arise with her op

Holby City spoilers for tonight reveal the day of Max’s operation has arrived.

But will it be enough to keep Andrei from leaving again?

Max is left devastated when Treve informs her she is anaemic. This means her breast reconstruction following her mastectomy cannot go ahead.

Max then decides not to have the surgery at all, until her memories of Essie give her plenty of food for thought.

And how will Louis react? Get the hankies ready because very emotional scenes are on the way…

Read more: Who plays Treve Harding in Holby City? Here’s where you recognise Karl Collins from!

Having convinced Andrei to undergo the surgery he needs, Kian is oblivious to the consequences of his actions.

And when Evie finds Andrei suffering in the basement, repercussion seem inevitable – and could take Kian under.

A furious Fletch then insists Lucky follows protocol and reports Andrei before he take matters into his own hands.

However, taking out Sacha may not have made him completely hardened.

And during a chat with Louise about family and friends, Dom comes to realise he may have made the wrong decision and reaches out to Hanssen.

Josh broaches the future with Ange, without her knowing Chloe has shown interest in him. However, Josh does make it clear that someone else might be on the scene.

An annoyed Ange seems to cut Josh loose – before eventually admitting she doesn’t want Josh to see other people.

However, what will the reaction be from Dom and Chloe when they catch the furtive pair sneaking around at work?

Given little alternative by Fletch, Lucky is compelled to report Andrei to social services.

But while Kian is ecstatic at Andrei’s condition, he has no idea about what is about to hit him. Lucky can barely handle the guilt she’s feeling – but is there another option she could take?