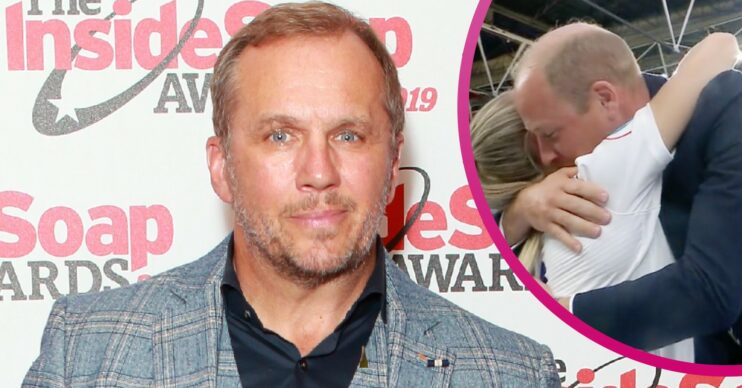 The Duke of Cambridge impressed Dean, better known as Will Taylor in the Dales, along with football fans as he didn’t hold back while congratulating England’s Lionesses on their historic win.

What did Dean Andrews say about Prince William?

Emmerdale star Dean took to Twitter, writing: “Please don’t come back with any Royalist debates when I say ‘I’m a massive fan of Prince William’.

“I’ve been fortunate to be in his company a couple of times and he is a top fella! Again ‘well blooming done the Lionesses’.”

And Dean’s followers on the social media site were – mostly – in agreement about the future king.

Please don’t come back with any Royalist debates when I say “I’m a massive fan of Prince William”. I’ve been fortunate to be in his company a couple of times and he is a top fella! Again “well blooming done the Lionesses ❤️”

One fan gushed: “Omg I loved that he dropped protocol and hugged, fist pumped, shook hands, he read his audience!”

Another agreed, saying: “No debate here, I’ve never had the pleasure of meeting him but he seems to be an honorable man!”

And a third said: “His enthusiasm and genuine pleasure at the end of the game, hugging the girls was great. You could see he was really happy.”

Prince William, along with his wife Kate, also took to Twitter last night to congratulate the Lionesses on their incredible victory.

They wrote: “What a night! Just brilliant” following England’s 2-1 victory over Germany at Wembley.

The Duke, who is the president of the Football Association, presented the team with the Euro trophy after their extra-time goal ensured the historic win.

He wrote: “Sensational. An incredible win @lionesses and the whole nation couldn’t be prouder of you all. Wonderful to see history in the making tonight at Wembley, congratulations! W.”

Even William’s grandmother, the Queen, sent the Lionesses a message.

The 96-year-old monarch, who’s been dogged by rumours of poor health since last year, said: “My warmest congratulations, and those of my family, go to you all on winning the European Women’s Football Championships.

“It is a significant achievement for the entire team, including your support staff. The Championships and your performance in them have rightly won praise.

“However, your success goes far beyond the trophy you have so deservedly earned.”